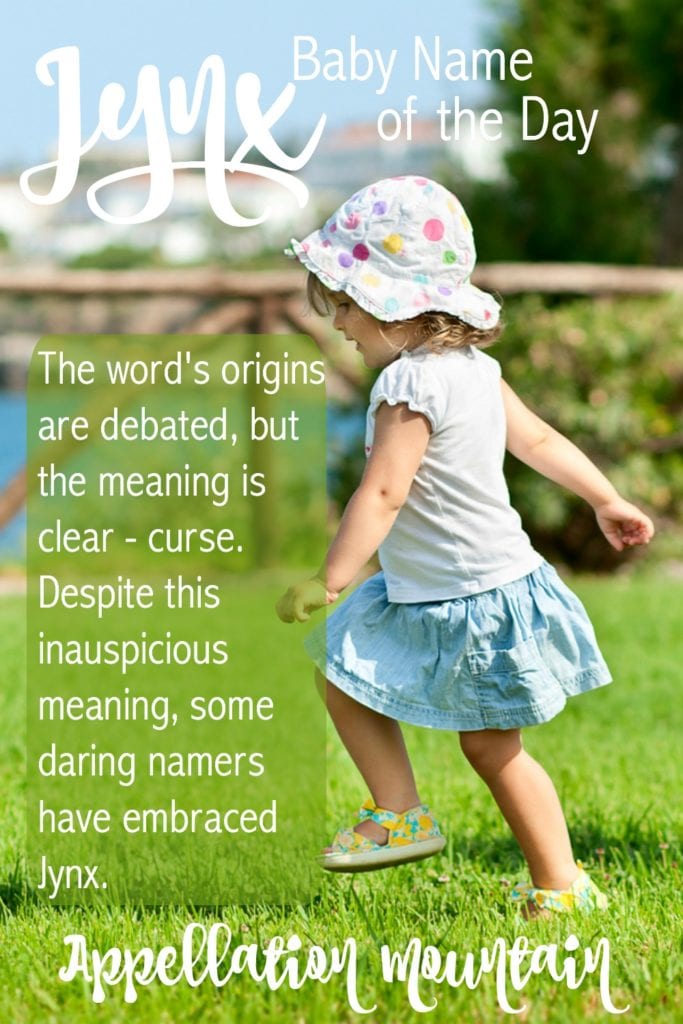 Inspired by a recent birth announcement, the completely unexpected Jynx takes center stage as today’s Baby Name of the Day.

Jynx: Is it even a name?

The NFL’s Antonio Cromartie welcomed twin daughters in May 2016: Jynx and J’Adore.

J’Adore comes from French, literally meaning “I adore.” The rarity has crept into wider use in the US since 2000.

Meanwhile, Jynx failed to chart in the US Social Security records.

Jynx: To the Dictionary

Jinx means a charm or a spell. That sounds promising, but a jinx typically brings misfortune.

Theories abound regarding the word’s origins, from other slang terms like jyng and jink, to an  1860s American folk song.

Despite the negative meaning, the sound is light-hearted. If you engage in hijinks, you’re indulging in free-spirited – and harmless – adventures. Kids rush to say “jinx, you owe me a soda,” when they both say the same thing at once. And “Jinkies!” was Velma’s catchphrase on the Scooby-Doo cartoons.

Since bird names appeal for girls, this name might be free from curses after all.

Known for their astonishing ability to turn their heads nearly 180 degrees, wrynecks are a type of woodpecker found in Europe and Africa. Wryneck comes from the Latin iynx – and predates the use of jinx to mean curse.

In Greek myth, the nymph Iynx found herself in all sorts of trouble. One story reports that Iynx cast a spell to make Io fall for Zeus. As revenge, Hera turned her into a wryneck bird. Or maybe Iynx was boastful and attempted to beat the Muses in a contest. Either way, she ends up as a wryneck bird.

Once Iynx had joined Club Avian, the wryneck was used to cast spells, as in the story Jason and his ill-fated bride, Medea.

At least two cats have answered to similar names: Mr. Jinx, of Meet the Parents fame, and Mr. Jinks, from a 1950s era cartoon.

But the only uptick in the name’s use comes from a comic book character. Li’l Jinx debuted in the Archie comics universe in 1947. At the time, mischief-making little girls were trending in comics. Jinx joined fellow Li’ls Lulu and Audrey. From 1956 to 1957, she headlined her own title. She was revived in the 1970s, and again as recently as 2013 – that last time as a teenager.

The story attributed her name to a Halloween birthday.

How did Falkenberg get her unusual name? Eugenia comes from her dad, Eugene, while her mother thought Jinx would bring good luck.

This generation of parents probably first heard Jinx as a given name in 2002’s Die Another Day. Halle Berry played NSA agent and James Bond ally Giacinta “Jinx” Johnson. Agent Johnson told Commander Bond that she got her name thanks to her Friday the 13th birthday.

Rarely do I say parents should avoid a name. (Here’s one exception.)

I do think Jynx – or Jinx – deserves a yellow light, thanks to that meaning. But with an upbeat sound and some interesting namesakes, it could make a fun nickname for a longer name.

What do you think of Jynx? Would you use it as a nickname?