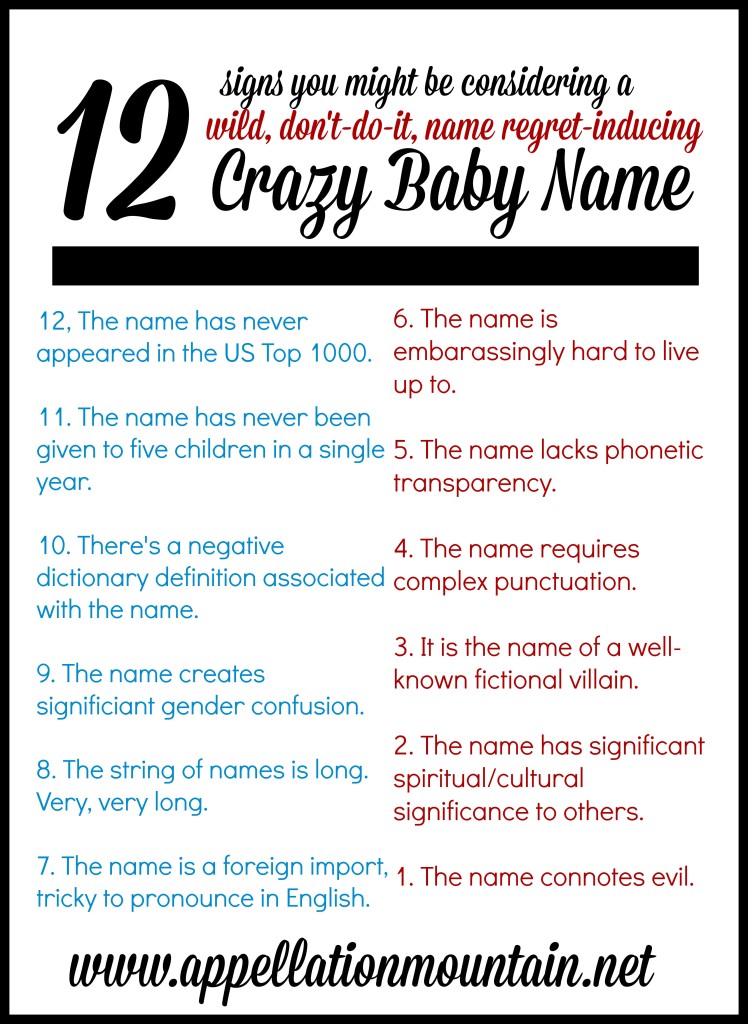 I’m an advocate for unusual names.  I’m willing to defend a lot of choices that are outside the mainstream, whether it is reviving a name all-but-lost, choosing a non-dominant spelling, embracing an unconventional word, or deciding to borrow from another language.

Sure, an unusual name might raise a few eyebrows – but in our age of Jayden and North, chances are that you won’t choose a truly crazy baby name – no matter how different that name may be.

How do you know if your choice crosses a line – and what line exactly, are you measuring against?

We’ve all heard names that feel over the top.  But defining exactly why they qualify as crazy baby names is a little tougher.

Ultimately, it is a personal decision based on your lifestyle and values.  If you’re a performance artist living in New York or L.A., and all of your friends are in similarly creative fields, I can guarantee that you can blithely violate many of these guidelines – though your parents in Poughkeepsie might not be thrilled.

Now, a disclaimer: most of these rules can be blithely ignored when you’re choosing a middle name.

Yellow Light: Caution, You Might Be Considering a Crazy Baby Name

Make no mistake – there are some amazing names that have yet to crack the US Top 1000.  Even more names once appeared, but no longer chart.  Cordelia, anyone?

But if a name has never appeared on the Top 1000 list, it may be unfamiliar to many.  This isn’t a dealbreaker, but it is worth considering – how much patience do you really have for repeating your child’s name?  If saying “No, it isn’t Mason, it’s Macon, like the city in Georgia” will make you batty, then this yellow light is for you.

11. The name has never been given to five children in a single year.

The US Social Security Administration reports every name given to five or more children in a given year.  You can find the data on their website here, or search names at Nancy’s Baby Names.

These are the names that no one is using, names could surprise – or even shock – others.

Or hey, maybe not.  Maybe you’re just at the very start of a trend.  Maybe you’ve found a name that really works, even though no one is using it.  (Blogger Rebecca Woolf at Girls Gone Child is genius at this.  Her kids are Archer, Fable, Reverie, and Boheme.)

10. There’s a negative dictionary definition associated with the name.

Let’s be clear: the fact that your mother-in-law knew a mean girl called Sabrina in grade school does not automatically disqualify the name.

And once a name goes mainstream, the meaning is less of a concern.  Mallory means unfortunate, but Family Ties made it a possibility.

But how about bane?  Bane as in burden, as in “bane of my existence.”  Yes, it’s archaic(ish), not something you’d use in everyday conversation.  Of course, that’s probably the reason Bane checks off another box farther down the list …

Oh, this is a dicey topic.

I’m willing to defend naming a girl Elliot or naming a boy Ashley.  But Ashley William is better than Ashley Quinn for a son, and Elliot Jane is better than Elliot James for a daughter.  Even if you’re wild about gender neutral names, a clearly gendered middle can serve as a good fallback in case your child finds it frustrating.

Of course, things change.  I raised an eyebrow when friends of ours chose Avery Quinn for their daughter fifteen years ago.  Now, of course, Avery is a solid favorite for girls, and Quinn, too, is more common for Team Pink.

Some gender-bending would be downright strange.  A girl named Lyle?  Maybe, in our Lily-Lyla-Delilah age.  And yes to Frankie and Charlie and Georgie, too.  But just plain George?  Frank rather than Frances?  Charles instead of Charlotte or Charlene?  The light changes from yellow to red.

Two middles is absolutely fine.  Two middles and a double-barreled surname?  Sure.

More than that?  Maybe.

But probably not.  Sure, there are reasons to go the Uma route, like honoring all three of your great-aunts, or, um, maybe all of your favorite athletes on the championship-winning team …

I understand Uma’s impulse, but a little bit of restraint isn’t a bad thing.  This is even more true if your child is going to be known by a third or fourth middle, meaning a name that many an official form will unwittingly omit.

7. The name is a foreign import that sounds great in another language – but is tricky to pronounce in English.

Importing a name from another language can be a great way to honor your heritage and find something distinctive for your child.

But consider this question before you proceed: can the average American English speaker say the name in a way that is pleasing?

Yes, I know.  It is lazy and disrespectful to automatically convert unfamiliar names to a mainstream alternative.  But it is also foolhardy to choose a name with sounds that cannot be reasonably pronounced by non-native speakers.

And I don’t mean Niamh – a non-intuitive spelling doesn’t stop us from correctly pronouncing this name.  I mean names that are butchered in English because Americans can’t say the ts or the cz sound, or the vowels, as intended.

If your beloved name isn’t the same when said in English, it might be time to consider a name that crosses over more gracefully.

6. The name is embarrassingly hard to live up to.

Yes, we’ve called our children Grace and Constance for years, and names like Propser, Mercy, and True fall somewhere between Puritan revival picks and modern virtue names.  But even if such names convey an ideal, it is one ideal – not a general image of flawlessness.

Hyper-masculine names fit into this category, too.  Yes to Gunnar – he’s Germanic, whether he’s a crack shot or no.  But Blade? Rowdy?  You might be the coolest of the cool, but what if your kiddo ends up a bookworm?

Some of these daring names do go mainstream – Miracle is now in the girls’ Top 1000, and Legend ranks for boys.  I’ve rethought my position on Maverick – if the name ranks #272, it has lost much of its shock value.

And there’s no guarantee that your kids, Perfection and Awesome, will spark a trend.  And what’s it like to bring home a C on the spelling test or get cut from the basketball team when you’re supposed to be Awesome?

I first heard the term “phonetic transparency” here.  While Name Lab works with corporate clients, I think it applies to choosing names for human beings, too – it should be easily pronounced, based on the spelling.

There’s something to be said for sticking with a standard spelling – in an age of scanning, our eyeballs immediately recognize Michael and Georgia and Madeline.  And yet Madolin and Mykel and Jorja just squeak past – they might cause some confusion, and a whole lot of let-me-spell-it-for-you.  But they’re not unwearable.

But how about Meily?  Is it a respelling of Miley?  Or maybe Maylee?  Or a surname name in the first spot?  Even if it is your maiden name, it is worth considering whether Meily works as a given name.

Likewise, if a respelling is miles away from the expected, it might spell trouble.  I once saw Eighmei suggested on a message board.  Yes, that’s a tortured respelling of Amy.  Eimee might be okay, but Eighmei?  That’s just excessive.

I’ve seen K’lee and M’kayla and J’den, and I get it.  I understand that they’re the same as Kaylee, Makayla, and Jayden.

Names like these are recorded in official records as Klee, Mkayla, and Jden.  I think I would automatically know how to say the second two, but the first doesn’t instantly say “Kaylee” to my eyes.

Diacritical marks are an even dicier subject.  Ask any French teacher – yup, you have to know the different between grave and aigu, and the circonflexe is not optional.  But here in the US – and online – they’re quite often omitted.  (They’re officially banned in Australia.)  We know how to say Jose and Chloe without the marks, so you’re probably safe importing most names.  And my personal observation is that in daily use, plenty of kids use them without difficulty.  But if it will drive you batty to find that your state won’t include the mark on your child’s birth certificate?  You may want to find another name.

3. It is the name of a fictional villain.

No, you cannot name your child Anakin.

Wait, I take it back.  Nothing will stop you from naming your child Anakin.  I love the sound.  So did 143 other sets of parents who gave the name to their son in 2013.  Like Maverick or Messiah, the more mainstream a name becomes, the lower the shock value.

But you wouldn’t consider Maleficient.  And Bane is a super villain in the Batman universe.  Both names combine a negative meaning with a memorable bad guy figure.

Sure, we later learn the backstories on plenty of bad guys, and they’re reinvented as just plain misunderstood.  I suppose that’s the deal with Anakin.

But when it comes to borrowing from fiction, you’re almost always on safer ground with a hero – or at least a neutral figure.

2. The name has a deeply spiritual significance to others.

This might be one of the most challenging prohibitions, because frankly, we know what we know.  And no one chooses their child’s name with the intent to insult others.

But that’s precisely what has happened.  The two most common examples?  The controversial Cohen, a name reserved for the priesthood in Judaism, and names like Dakota and Cheyenne, taken from Native American tribes.

The line is fuzzy at best.  Trinity strikes me as borderline sacrilege, but I know people of faith who arrive at Trinity as a deeply spiritual choice.

Remember when I said you can’t name your child Anakin.  Except that you can.

You cannot name your child Hitler.

Another one?  While the sound is lovely and the meaning has aspects beyond the satanic, Lucifer also feels impossibly unwearable – regardless of your personal beliefs.

Happily, the list of truly unthinkable names is brief.  Most choices are more nuanced – bad people and good have answered to George and Elizabeth, Ryan and Laura, and nearly every name in between.

But if you’re choosing a name purely for shock value, a name that will be jaw-droppinlgy controversial from kindergarten to job interviews to fifty years post-mortem, when the name is found on a gravestone?

Do you agree or disagree with this list?  Would you add any other rules?