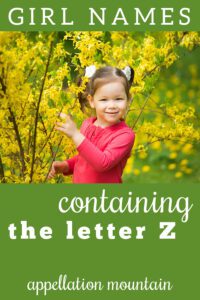 There aren’t the names that begin with Z. (You can find that list here.)

These are the choices that tuck Z in the middle spot, or sometimes at the very end.

Sometimes it’s a scissor-y sound, midway between S and Z.

Of course, some girl names containing Z are deliberate respellings, swapping in a Z to make the name a little edgier.

But plenty of these lean traditional, names that have always had a Z, even before high-value Scrabble letters were considered stylish.

From Top 100 favorites to rarities you might not have heard before, this list has something for everyone.

It looks like a respelling of Eliza, but Aliza is a Hebrew name with an uplifting meaning: joyful.

A place name with all the rugged appeal of the southwest.

More daring than Lily or Rose, and maybe made a little more name-like thanks to musician Iggy Azalea.

The French form of Azalea, often shortened to Zelie – as in Marie-Azélie Martin, or Saint Zelie.

This one is just plain fun: take lajward, the Persian name for the semi-precious stone. Turn it into lazur in Medieval Latin. Then bring it to French, where it became l’azur – the blue stone. And so Azure and Azura are shades of blue, colorful gemstone names far rarer than Ruby or Skye.

The Spanish form of Beatrice and Beatrix, and the rarest of the three.

An artist surname name that might make an intriguing first.

As in Theron, the South African-born actor. While it looks rare in English, Afrikaans names often use -ize to construct feminine forms of names, just like the more familiar -ine, -ette, and -elle.

The Spanish word for heart, a name with religious and romantic associations.

Invented by singer/reality star Larry Hernandez for his firstborn daughter with Kenia Ontiveros, the name has caught on well beyond fans of his show.

A traditional Cornish name popularized by Poldark – the novels, and both of the successful television adaptations.

Originally short for Elizabeth, Eliza has long since stood on its own. It’s often musical, from My Fair Lady to Hamilton.

The most rock-solid classic of names for a daughter, Elizabeth has it all – strength, history, nicknames galore.

A Spanish name meaning “to hope.”

Ecovintage Hazel is an antique in the middle of a serious revival.

Also spelled Ines, this is the Spanish form of Agnes.

A modern invented, made by smooshing together Jaz and Lyn. A dozen or more spellings and elaborations are possible.

Take flower power Jasmine, and swap the S for a Z, and you’ll have Jazmine. Jazmyn and other spellings are also seen.

The Persian name for the blue stone, also known as lapis lazuli.

Another short form of classic Elizabeth.

A Scottish surname name that became a chart-topping favorite in the US during the late 90s.

Another S-for-Z swap, this one possibly boosted by Dr. Seuss’ Daisy-Head Mayzie, as well as a French place name.

In graphic novel-turned-television series Lucifer, Mazikeen is a demon, who accompanies her boss from the underworld to Los Angeles. That seems like unlikely inspiration for a child’s name, but “Maze” is a compelling character, one who moves well beyond her pure-evil origins.

An old school nickname name, Mitzi started out as a German nickname for Maria.

The Spanish word for peace, as well as a title of the Virgin Mary and a name sometimes given in her honor.

It’s a lot of of name. And Scheherazade had a lot of stories. She’s the new bride who tells tales to her husband in 1001 Nights to delay her execution. (Spoiler alert: it works.)

The Hebrew Shoshannah became Susanna in Greek, and then Suzanne in French. From the 1940s through the 60s, it was a stylish favorite in the US, too.

A French nickname form of Suzanne.

A nickname form of Susan, made forever famous by the youngest Bailey child in classic Christmas movie It’s a Wonderful Life.

What are your favorite girl names containing Z? Would you add any names to this list? 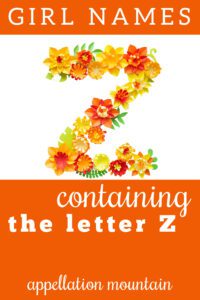