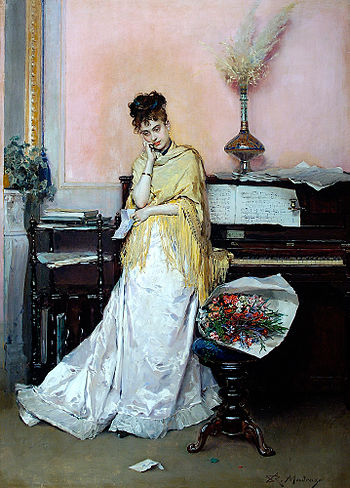 Today’s feature is a pan-botanical possibility with a feminissa feel.

Thanks to Laura for suggesting one she’s considering for her baby-on-the-way.  Our Baby Name of the Day is Fiorella.

If you live near New York, you might immediately think of LaGuardia. Most famous as an airport today, it’s named in honor of former New York City Mayor Fiorello LaGuardia.

Fiorello ran the city from 1934 to 1945, the Depression years through World War II – quite an era.  He was larger than life, a supporter of President Roosevelt’s New Deal policies, an opponent of the once all-powerful Tammany Hall machine, and successful builder of all sorts of urban infrastructure.  During his lifetime, the translation of his name – and his short stature – led to the nickname “Little Flower.”

This got me thinking about the phrase little flower.  If your’e Catholic, you probably know where I’m going: Saint Therese of Lisieux, known as the Little Flower.

Saint Therese’s autobiography, The Story of a Soul, remains widely read.  She’s among the most popular of modern saints, canonized in 1925.  So even if Fiorella isn’t saintly, it’s easy to argue that the name is rich with spiritual meaning.

Or not.  Because there’s also Isabella Rossellini, daughter of Ingrid Bergman and Roberto Rossellini, a model-actress and legendary beauty in her own right.  Born in 1952, her full name is Isabella Fiorella Elettra Giovanna.  (Plus, she has a twin sister named Isotta Ingrid!)  This makes Fiorella a gorgeous, glittering Italian possibility with Hollywood ties.

A handful of other notable Italian women from the 1920s through 1950s share the name, so Fiorella must have had a fashionable moment.

Fiorella has also made her mark in South America – especially Peru, where the name has charted in Peru’s Top 100 in recent years.

In the US, the name peaked in 2006, when 71 girls received the name. That’s the year that Fiorella Viñas was named Miss Peru, and then competed in the Miss Universe pageant. She didn’t win, but attracted enough attention to inspire a few dozen parents.

All of this makes Fiorella an international appellation with an interesting history.  But beyond the twenty-first century Peruvian beauty queen and the nineteenth-century French saint, is Fiorella wearable for a child born today?

While Isabella has fallen from the #1 spot in the land, Americans are still mad for -ella names.  Let’s look at the 2013 numbers:

This suggests that parents are seeking alternatives to former favorites like Isabella and Gabriella – without sacrificing that lovely -ella ending.

Fiorella is a big name, but no bigger or harder to wear than Alexandra or Samantha.  Easy nicknames range from Fi, Fia, and Fifi to Rella and Ella.  If you’re after something different, international, and feminine, Fiorella is one to consider.

What do you think of Fiorella?  Is she wearable for a girl in 2014?