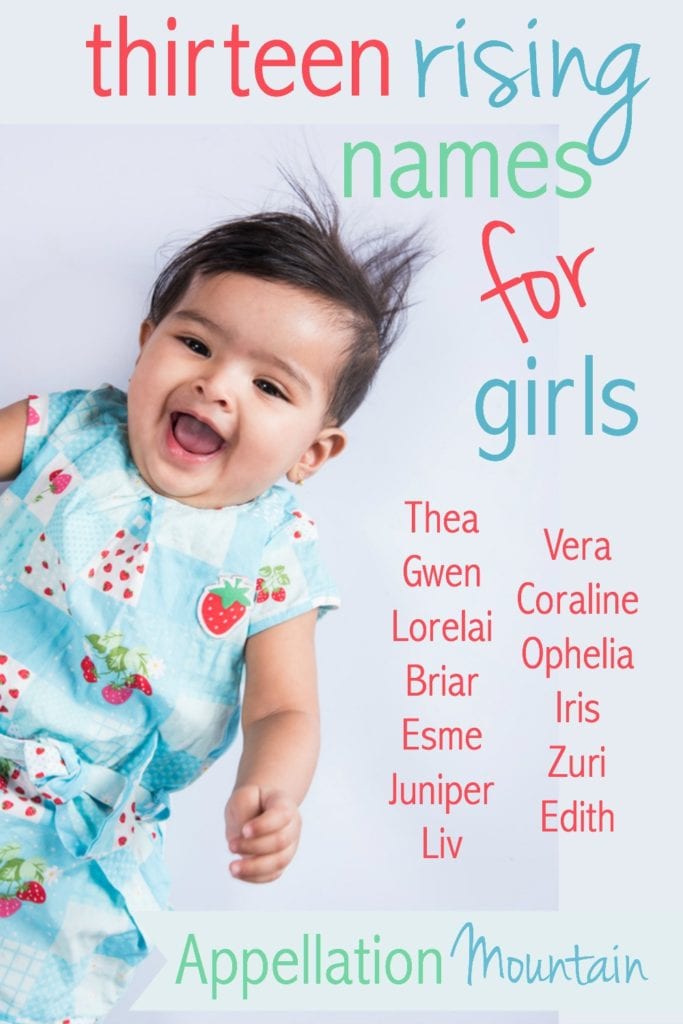 They’re the names that define how we’re naming our children today, and set the trends that will define the names we use for the next decade.

I started out with ten, then twelve, and finally thirteen best rising girl names 2016 – though you’ll see I squeezed a few extras in, too.

They’re brand new names and great old names back in vogue. Some signify a trend or style change; others are names that just feel like The Next Big Thing. And – to be perfectly honest – some of these are just personal favorites, names that strike my fancy as a lifelong observer of names.

My rules for inclusion on this list were simple: the name has to rank in the current US Top 1000 as just released by the US Social Security Administration, and it had to rise in rank in 2015.

Thea – Short and sassy, Thea is a nickname for Theodora or Dorothea. This makes Thea a member of the rising Theodore family. More than that, I think it’s a signal that Th names – long in style limbo – could be back. I’ll be keeping an eye on other gorgeous rarities, like Thessaly and Thisbe, in the coming years. Thea was up more than 300 places, suggesting that it’s a sister name for vintage choices like Cora and Stella.

Gwen – Is Gwen the new Claire? It’s a spare, simple name with plenty of backstory. And that’s not the only thing it has in common with Claire. While the name’s origins are different (Welsh, rather than French via Latin), Gwen means fair or blessed to Claire’s bright and clear. Gwen was up more than 200 places, and Gwendolyn was up, too. Guinevere remains unranked.

Lorelai and Adaline – We often debate whether pop culture boosts names or scares parents away. In truth? It’s both. But here’s something that pop culture can do consistently: completely change our opinions about the best spelling for a given name. The Gilmore Girls was a television staple beginning in 2000, and last year was filled with talk that Netflix is bringing back the popular series soon. Both mother and daughter (and grandmother) are all Lorelai, an alternate spelling for the German Lorelei. Lorelai was up 170 places, gaining on Lorelei – which all rose. As for Adaline, combine all of the spellings and this name skyrockets into the US Top Ten! The Age of Adaline, Blake Lively’s April 2015 movie, put this alternative spelling on the map. Adeline remains more popular, and Adalynn is most popular overall – but this one is catching on.

Briar – A nature name with fairytale cred, Briar fits right in with Brianna and Brielle, as well as Harper and Piper. The most intriguing thing about Briar isn’t the name necessarily – it’s that Briar debuted on the girls’ and boys’ lists in the same year. And why not? Briar also fits with Brayden and Bryce, Carter and Hunter. If Rowan can remain nicely gender neutral, why not Briar, too?

Esme – Every pop culture sensation has a break-out name. Luna from Harry Potter, Luke from Star Wars, and now maybe Esme from Twilight. Stylish parents were using Esme long before Stephenie Meyer’s vampires ever glittered, thanks to JD Salinger’s use of the name. This year, it was up over 100 places, making it almost mainstream.

Edith – Another E name up more than 100 places, the rise of Edith points to several trends: the influence of Downton Abbey; the popularity of nickname Edie, chosen by Keira Knightley for her daughter in 2015; and once again, those th names. Not so long ago, Edith felt hopelessly fusty. Today it’s a fresh possibility for a daughter.

Juniper – Juniper has gone from quirky rarity to mainstream nature name. It echoes the rhythms of former #1 name Jennifer, and picks up on the sound of another rising favorite, the vintage June. Juniper was up more than 60 spaces this year. This is the first year I’ve done this list, but something tells me that Juniper would’ve made best rising girl names 2016, 2015, 2014 … heck, way back to the name’s 2011 debut.

Liv – A minimalist approach to baby naming is trending, with super-short names like Ava and Mia on top. Liv could be a nickname for the very popular Olivia, but it also stands on its own as a Scandinavian import. It comes from an Old Norse name, but happens to coincide with the modern Swedish and Norwegian word for life. Liv was up nearly sixty places this year.

Vera – Move over, Cora and Clara. After rising more than fifty spots, Vera could be the new go-to name for parents after a short, sweet, and complete vintage name for girls. Vera comes from the Russian word for faith, but we tend to hear Vera and think of the Latin veritas – truth. Either way, it’s a great meaning for an appealing name. Plus, V is the letter of the moment – just ask the parents of Ava, Olivia, and Victoria.

Coraline – Coraline is an interesting name. While it existed before Neil Gaiman chose it for the heroine of his 2002 novella, it wasn’t often used. Only after the 2009 movie came out did Coraline really take off, a mix of our affection for Cora names, and the rise of choices like Madeline and Adeline. Now Coraline is up another fifty-plus spots, and feels like an intriguing possibility – literary, heroic, vintage, but completely novel at the same time.

Ophelia and Cordelia – Last year it was Cordelia. This year, it’s Ophelia’s turn to re-enter the US Top 1000. Shakespeare died four hundred years ago, but the names he chose for his characters remain broadly influential. Just ask all those women named Jessica. Or Juliet, Miranda, or Phoebe. While he borrowed as much as he invented, the Bard has the ability to make a name forever revival-ready. In the case of Cordelia and Ophelia, they’re both long, lovely names for girls with a -lia ending – an extra boost in our age of Amelia. Another name with Shakespearean influence? Arden debuted in the girls’ Top 1000 this year, too.

Iris – Floral names are pretty. That’s a good thing, but maybe Daisy and Lily strike you as too fleeting. In that case, may I direct you to Iris? It’s the name of a gorgeous flower, but also a name with spine. That’s partly the legacy of Irish writer Iris Murdoch, and partly just sound. 2001’s excellent biopic, Iris, starring Kate Winslet and Judi Dench, boosted the visibility of both. Now that Violet – another strong botanical possibility is so popular, no wonder Iris was up more than 25 spots.

Zuri – Zuri is thirteen on the list of best rising girl names 2016. (Okay, fifteenth. But who’s counting?) It makes the list for two reasons. First, there are always a handful of names that feel global, but increasingly mainstream. Zuri is latest in a long line of imports. It comes from Swahili, and means beautiful. It’s also the name of a cute Disney Channel character on series Jessie. Zuri was up more than 30 places, also boosted by LeBron James’ daughter Zhuri Nova.

Which of my best rising girl names 2016 is your favorite? Would you have included other names on this list?