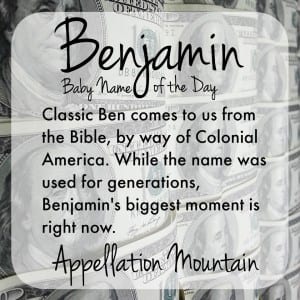 It’s been worn by an Old Testament patriarch, a founding father, a friendly bear, and a famous rabbit.

Top Fifteen week continues with Benjamin as our Baby Name of the Day.

Benjamin: From the Bible

Ben Franklin was one of the Founding Fathers. Franklin started out a printer and newspaper editor, and became a widely respected writer and civic leader. Franklin eventually served as Ambassador to France, but it is perhaps his unofficial roles that had a greater impact – Franklin was a noted scientist and inventor, and established many civic organizations, including the city of Philadelphia’s first fire department. He also helped establish the University of Pennsylvania.

It’s hard to say just how common the name was in Colonial America. Franklin was the fifteenth of seventeen children, so it’s safe to say that family names had been exhausted by the time of his birth.

No surprise, then, that Ben was big in nineteenth century America. The name ranked in the US Top 100 from 1880 all the way through 1926. Benjamin doesn’t have the uninterrupted history of use shared by classics like John and Henry, but the name has never fallen out of the US Top 200.

The current US Top 1000 includes other Ben- names, too: Bentley, Bennett, Benson, and Benton.

If you’re looking for a reliable name for a son, it’s hard to go wrong with Benjamin.