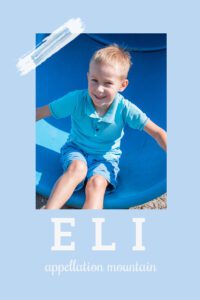 The baby name Eli feels brisk and modern, but deeply rooted in history, too.

In the Old Testament, Eli was a high priest of Israel, and mentor to Samuel.

His sons cashed in on their dad’s success, and things ended badly.

But the baby name Eli has been in use for generations, one of several Biblical choices parents embraced post-Reformation.

Two possible origins and meanings attach to the name. First, the baby name Eli might come from a Hebrew word meaning ascension.

But it’s also possible to get to Eli from a longer El- name, of which there are many.

Nearly all of the longer El- names for boys refer to God.

Elijah means “My God is Yahweh.” Eliezer translates to “My God is help.” And Elihu? That’s “My God is he.” Lots of El- names dot the Old Testament. Some Elis, then, take their name from a longer version.

Back to Elijah for a minute. It became Elias in many languages, and Elian in a few more. Elliot and Elliott started out as surnames, all derived from this same cluster of Eli names.

There’s something about the baby name Eli that feels tied to American history, or perhaps the scope of world history.

THE AGE OF ELS

What explains the surge in popularity?

The baby name Eli and all the El names for boys mirrors a trend on the girls’ side. Ellie names, from classics like Eleanor and Eliza to -elle enders like Annabelle and Gabrielle – have dominated girls’ names in recent decades.

It helps that we love mini names, especially vowel-forward ones. Just ask Leo and Kai and Levi.

The NFL’s quarterback Eli Manning – winner of two Super Bowls with the New York Giants – helped put the name on parents’ radar, too. After all, 2008 – the year the baby name Eli first cracked the US Top 100 – also marks the first time Manning led his team to defeat the New England Patriots in the Super Bowl.

Television characters have worn the name on Emmerdale, Veronica Mars, Lie to Me, Heroes, The Good Wife, and Xena, as well as the short-lived Eli Stone, a series about a lawyer who can see the future.

In 2010, Denzel Washington played a tough guy on a sacred mission in The Book of Eli.  His Eli was charged with delivering the last copy of the Bible to safe keeping, despite an impressive number of bad guys in his path. Jurassic World: Fallen Kingdom gave us a villainous Eli.

Despite ancient and storied roots, the baby name Eli feels fresh and modern. It’s very much at home in the twenty-first century.

Maybe it’s sound. Or maybe it’s because we instinctively recognize that Eli has at least as much history as John, but isn’t nearly as often heard.

If you’re looking for a strong name for a son, one that feels current but deeply rooted in tradition, compact and stylish Eli could be just the thing.

What do you think of the baby name Eli?

First published December 8, 2010, this post was substantially revised and updated on October 26, 2021. 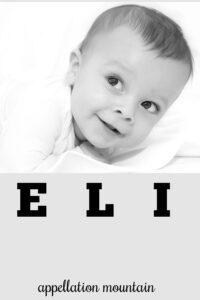