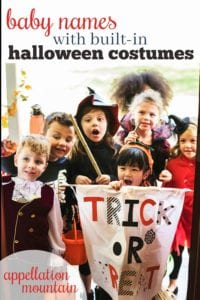 Have you ever thought about baby names with built-in Halloween costumes?

When we named our daughter, I immediately started dreaming up Halloween costumes that matched her name. She’s been Clio the Muse, and Cleopatra, of course. When she was just a few weeks old, I realized that Clio was the name of the goldfish in Pinocchio, and stuffed my little newborn into a fish suit. (She hated the hood!)

Some of the most popular baby names come with built-in costume ideas. While there’s no shortage of possibilities, I thought I’d pick some of my favorite baby names with built-in Halloween costumes.

My rules: it had to be extremely easy to make or buy. I will be in awe if you construct a cardboard bridge costume for your daughter Brooklyn, but it seems unlikely that most of us could.

I know there are dozens more! Have you ever dressed up in a costume inspired by your name? Or have you dressed your child accordingly?

An enduring storybook character, everybody knows Alice of Wonderland fame. There’s the Disney version, of course, both the animated 1951 classic and the 2010 and 2016 live action remakes. But the world has given us dozens of other versions, in stage plays and ballets and ABC’s Once Upon a Time in Wonderland, which gives you some room to make Alice your own. Plus, the rest of your family can dress up as the White Rabbit, Mad Hatter, the Cheshire Cat, the Queen of Hearts, and the rest of the Wonderland crew.

Amelia Earhart was born way back in 1897. Her name was familiar, but not wildly popular at the time. She became the first woman to fly across the Atlantic in 1928. In 1937, she disappeared over the Pacific Ocean while attempting to fly around the world. It’s her legacy that transforms Amelia from just another lady-like vintage charmer to lady-like vintage charmer and daring adventurer. It’s an easy Halloween costume, too. The only problem? Given the popularity of the name, there could be lots of little aviators ringing your doorbell this October 31st!

The Kansas farmgirl who flew over the rainbow and helped save the day makes an easy costume – just add ruby slippers! For years, Dorothy was trapped in Golden Girls territory, but lately this 1920s favorite feels fresh and new again. Scarlett Johansson has a Rose Dorothy; the name has nearly doubled in use over the last decade.

If you chose a regal appellation for your son, the costume is as easy as a crown and maybe a scepter. This works for boys named King, but also Kingston and Kingsley. It might even work for boys with names traditionally worn by kings, like Louis and George.

If your little prince answers to Leo, there’s a ready-made costume waiting for him: King of the Jungle. As with King, any of the names starting with Leo can convincingly don a lion costume. And with so many Leo- names – for boys and girls alike – odds are that you might find a whole pride of lions on your doorstep for Trick-or-Treat.

It’s a great Americana choice, a fast-rising favorite for boys, and comes with an easy Halloween costume. It’s easy to dress up like the 16th President of the United States – all it takes is a stovepipe hat and a fake beard. There’s something rugged and action-oriented about this name, but the ties to history make it feel more traditional than might otherwise be the case.

There are dozens of famous Lukes, from the New Testament to actors, musicians, and athletes of the present day. But one Luke looms larger than the others: Skywalker. His story forms the foundation of the sprawling Star Wars universe, inspiring countless sequels and prequels and spin-offs, countless books, and next, sprawling lands in major theme parks. Not bad for a name nearly as traditional as John. Though, of course, this generation might prefer to dress up as Finn or Poe instead.

One more storybook idea: Madeline, as in Ludwig Bemelmans’ French schoolgirl, introduced to the world in 1939. Her blue coat, and the red bow around her hat make her easily recognized in all of her seven original books, as well as animated versions that followed. She’s a beloved character, and parents have fallen hard for this name, in multiple spellings, from the more popular Madelyn to the oh-so-French Madeleine. Because while the stories are set mostly in Paris, it’s the -line spelling on the cover of the books.

The night Max wore his wolf suit and made mischief of one kind and another … So begins the beloved children’s story Where the Wild Things Are, by Maurice Sendak, complete with a dark-haired, rambunctious child named Max and an island full of mysterious, wild creatures. With many Max names in favor, it’s easy to find a favorite that shortens to wolf-suit-wearing Max.

Classic Peter remains relatively uncommon by today’s standards. But pick this enduring name for a son, and you’ll have plenty of Halloween costume possibilities. Peter Pan might be the most obvious, but a baby Peter Rabbit could be darling, too.

Do your kids have names with built-in Halloween costumes? 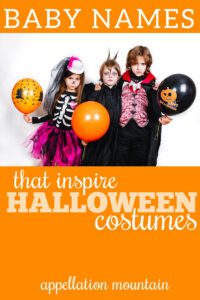