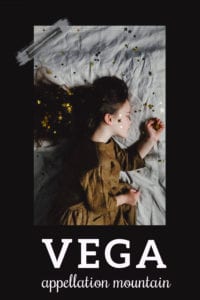 Vega takes the stylish initial V to the stars.

Thanks to Michelle for suggesting our Baby Name of the Day.

If you know Vega, maybe you’ve been stargazing.

Vega is a star in the constellation Lyra. In Arabic, it’s al-Waqi. The most frequently repeated translation is “swooping eagle.” That sounds graceful, and it is – but it’s also deadly. Eagles swoop down to attack their prey.

In China, the star is associated with a legend about Zhin, the weaver girl.

Zhin fell for a cowherd, represented by Altair – another star in the night sky. The pair had a Romeo and Juliet-like romance, separated by a river. Once a year, the stars come close in the night sky, and the Japanese celebrate with the traditional Tanabata festival.

There are more stories – and dozens of variations on the tale. But it lends the name a romantic aspect.

This is still a nature name in Spanish, but it’s found on terra firma.

In Spanish, la vega means the meadow. Las Vegas is known for gambling and general excess nowadays. Back in 1829, a group of traders encountered the Las Vegas Valley on their way west to California. A combination of wild grasses and desert springs made the place a much-welcome oasis, and the pretty, poetic name was chosen accordingly.

So not only is the baby name Vega tied to Nevada’s hotbed of night life, it’s a Marian name, too. How’s that for a split personality?

It’s popular in Spain, too. Singer-songwriter Mercedes Carpio, known professionally as Vega, first hit it big in the early 2000s and might be part of the reason for the name’s rise.

The baby name Vega also has history as a surname. A longer history, in fact.

This generation of parents might have another thought when they hear Vega: Pulp Fiction and Reservoir Dogs.

The Vega brothers appear in the movies: Vic in Reservoir Dogs and Vincent in Pulp Fiction.

Other pop culture references for the name include:

There have been a handful of girls given the name, in India and Scandinavia and the US, too.

In Sweden, it was most popular in the early twentieth century, apparently inspired by the star’s name. This tracks with early use in the US, too.

Danny Wood of New Kids on the Block named his daughter Vega.

In 2018, there were 48 girls and 14 boys named Vega in the US – rare, but not unknown. The baby name Vega has nearly doubled in use for girls over the last five years.

Overall, it’s a modern, edgy name with ties to global cultures and the natural world – a great choice for parents intent on something different and distinctive.

What do you think of the baby name Vega?