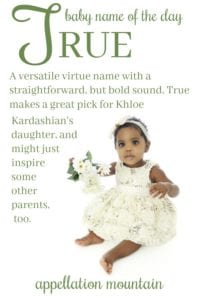 True makes for short virtue name with a cool, modern sound. What’s not to love?

Thanks to Aurelia for suggesting our Baby Name of the Day, and to Khloe Kardashian for putting it back in the headlines.

But then there are the virtues that seem more expansive. Honor is a universal good. And True, in any of its forms, likewise seems unambiguously positive. Look it up in a thesaurus, and the words that come up are faithful, trustworthy, constant, honest, steady.

In Old English, the word was triewe or treowe, and similar words are found in other languages. Interestingly, our word tree shares some of the same origins.

It’s associated with dozens of appealing phrases and ideas. We’ve been falling in treowlufu – true love – since Old English was the language of the day. The phrase “true north” was first used in the sixteenth century. “True blue” dates to the eighteenth, and dreams have “come true” since the nineteenth century.

True: So Many Forms

This element appears in plenty of surnames, like Truitt and Truman. The Tru- doesn’t always come from the virtue. Still, the sound is unmistakable, and plenty of parents have probably been drawn to the names for the positive association.

As a given name, this choice has long seen some sparing use for girls and boys, at least since the nineteenth century, and might be older still. We know that Truth and Verity were used by the Puritan settlers in the New World.

All forms of the name are enjoying some use today:

There’s also Gertrude, a vintage name that remains little used today, and nickname Trudy or Trudie, which seem rich with potential in our age of Sadie and Hattie.

Another popular form? Tru, hold the ‘e’. This spelling was given to 31 girls and 80 boys in 2016, but was used for 125 girls back in 2004. Why? Short-lived Fox series Tru Calling, starring Buffy the Vampire Slayer alum Eliza Dushku, ran for two seasons between 2003 and 2005. Dushku wore another virtuous, short name during her time on Buffy. She played a vampire slayer called Faith.

Kardashian matriach Kris revealed a twist: not only is this an appealing word name that fits their family’s signature style, it’s an actual family name. Kris’ grandfather was born True Otis Houghton, and her dad was Robert True. That makes little Miss Thompson the third generation to answer to the virtue name.

It will be months before we know if this high-profile birth announcement influences parents, but it seems possible.

Not only is this name virtuous, it’s also versatile. It feels like a possible first name, especially given our affection for single-syllable names for boys and girls.

Or it could be a great, bold middle name choice, again for either gender.

If you’re looking for a modern virtue name that feels bold and tailored at once, True could be the name for you.

What do you think of True? And do you like this name better for a boy or a girl, or do you think it is truly gender neutral?

This post was originally published on May 7, 2015. It was revised substantially and re-published on April 16, 2018.