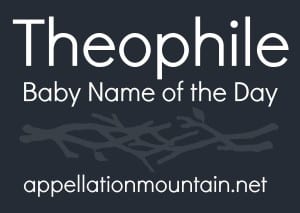 If Theodore is catching on, how ’bout this related name?

Thanks to Caitlin for suggesting Theophile as our Baby Name of the Day.

File Theophile with Theodule and Theodosia – an unusual Theo- name that has undeniably seen use, but has mostly faded, at least in English.

Theophile is the French form of the Greek Theophilos, Theophilus in Latin – theos refers to God, and philos to love, so Theophile is loved by God, or one who loves God, or maybe just a friend of God.

The name was in use in the ancient world.  Coins tell us that an Indo-Greek king, somewhere in the last two centuries BC, wore the name.  And Plutarch quoted an earlier writer’s work on the geography of Italy – the writer was also Theophilus.

Then comes the New Testament.  Both the Gospel of Luke and the Acts of the Apostles are dedicated to Theophilus.  But exactly who Theophilus is remains unclear.  There are three possibilities:

Theories abound, but let’s leave with this: all of the Theophil- names are ancient, indeed.

History gives us many more bearers of the name:

From history to literature to music, there’s a Theophilus for nearly everyone.  Theophile is much harder to pin down, and according to Meilleurs Prenoms, he’s rarely bestowed upon boys in France today.

Still, you’ll find the occasional Theophile in the US, mostly in Cajun families.

Is he wearable in 2014?  Maybe.  Theophilus could blend in with other ancient names like Atticus and Augustus.  Plus, the nickname Theo is very stylish.