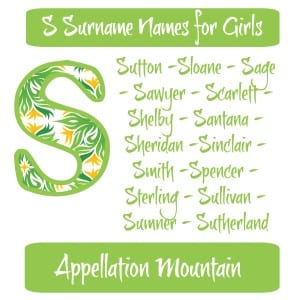 Sometimes, it’s all about an initial.

A names have been big in recent years, from glam Ava to vintage Amelia to musical Aria to borrowed-from-the-boys Aubrey.

And sometimes, it’s all about a style. Nature names, short names, long names. Surname names are definitely one of those trends over the past few decades, with names like Taylor and Madison making the girls’ Top Ten in the US.

The pair of names that inspired this post is in the title line: Sutton and Sloane. At first glance, they’re gender neutral. But pop culture gives us a popular actress called Sutton, and a memorable character named Sloane, so they tend to lean feminine. Along with a handful of other S names, they’re at the forefront of this trend.

Sloane – Ferris Bueller’s Day Off was packed with unusual names, from our hero, Ferris, to his fair maiden, Sloane. It was easy to love stylish and thoughtful Sloane Peterson. And it felt like a girls’ name, because we’d just met Diana, Princess of Wales, and former Sloane Ranger, five years earlier. It’s taken a long time for Sloane to catch on as a girls’ name, though – Ferris took his day off back in 1985! Sloane first cracked the US Top 1000 in 2009, and now stands at #405. Could this slim, trim name be the next big thing?

Sutton – Sutton Foster hit it big on Broadway, collecting Tony nominations and two wins, before making the leap to the small screen. We loved her in Bunheads, and now she’s set to star in Younger. Worlds collide – Younger is based on a novel written by Nameberry’s Pam! Back to Ms. Foster – yes, it’s her real name, and she was part of a tiny trendlet – a handful of girls received the name in the 1960s and 70s. Sutton says her mom heard it on television, but exactly where on television has proved elusive. In 2013, Sutton debuted in the US Top 1000 at #830. Here’s guessing we’ll hear more of this name.

Call them Shirley’s granddaughters. They’re the S surname names for girls that have made it into wider use, paving the way for Sutton, Sloane, and some of the names coming up in the final section of this post.

Sage – Sage is many things – a nature name, a virtue name, as well as a surname name. It currently ranks #735 for boys and #457 for girls. But add in variant spelling Saige – currently #646 – and this one clearly leans feminine.

Sawyer – Sawyer first appeared in the US Top 1000 for boys back in 1991, but the first Sawyer I met was a baby girl, born around 2002. The name has rapidly risen in use for both genders over the last few years, reaching #120 for boys and #446 for girls. It really might be the age of the literary surname name, from Harper (Lee) to (Huckleberry) Finn to Tom Sawyer.

Scarlett – It’s so easy to forget that Scarlett started out as a surname. There’s lovely Scarlett Johansson, and, of course, legendary Scarlett O’Hara, of Gone With the Wind fame. But Miss O’Hara was named Katie Scarlett, after her grandmother – and Scarlett was her grandmother’s last name. Once upon a time, Scarlett was an occupational surname for someone who dyed or sold bright cloth. Now, it’s so far into first name territory that it barely belongs on this list. Scarlett ranked #42 in 2013 – the most popular of all the S surname names for girls.

Shelby – Two fictional characters took Shelby from a surname name occasionally given to boys to a popular name for girls. First was Barbara Stanwyck’s character in The Woman in Red, all the way back in 1935. 1935 was peak Shirley – the leader of the S surname names for girls! After Stanwyck’s star turn, Shelby rocketed in the girls’ Top 200. But the name was almost forgotten until 1989, when a young Julia Roberts played sweet, Southern Shelby in Steel Magnolias. By 1991, Shelby had shot to #33. Without a boost in recent years, Shelby now feels more mom name than rising surname choice – but that could change. Shelby ranked #259 in 2013.

S Surnames for Girls: The Next Wave

With so many S surname names for girls in the Top 1000, and others are the rise, the question is this: where’s the next wave? Which names with a similar style could follow Sutton and Sloane, Scarlett and Sage, into the mainstream?

Santana – Santana is a surname, a contraction of Santa Ana, as in Saint Ann. So it is better for boys or girls? Legendary guitarist Carlos Santana makes me think boy, but the first high profile use of Santana as a given name was the fictional Glee character, a girl. Right now the numbers give this one to Team Blue. 204 boys were born Santana in 2013, compared to just 87 girls.

Sheridan – Sheridan briefly charted in the girls’ Top 1000 from 1996 – 1997 and again from 2000 – 2002. Sheridan could be big, save for one flaw. Sheri is something of a dated nickname today, associated with the Cheryls and Sherris of an earlier generation. Then again, Sheridan could be a great way to reinvent any Sher-/Cher- name for a new generation. Bonus:

Sinclair – Claire and Clara and company have been popular in recent years. Sinclair is a surname, a contraction of St. Clair. 10 girls and 9 boys were given the name in 2013, so this one remains extremely rare – but perfectly wearable.

Smith – It’s among the most common of surnames, and yet it’s rarely borrowed as a given name. Until recently, that is. In 2013, 121 boys and 8 girls were named Smith. Let’s give this one to Team Blue for now, but we’ve certainly heard mothers consider it for a daughter. Most recently, Love and Hip Hop’s Yandy Smith toyed with passing down her surname, but went with Skylar Smith instead.

Spencer – Spencer peaked for boys back in the 1990s, and currently ranks #250 and falling. Could it feel fresh for a girl in 2015? Once again, Princess Diana comes to mind. She was born Lady Diana Spencer. If surnames are equal opportunity for both genders, then there’s no reason Spencer doesn’t work for a girl, too. The numbers seem to bear this out. 178 girls were given the name in 2013, a new high. Equally valid spelling Spenser is rarely heard for boys or girls.

Sterling – Sterling ranked #580 for boys in 2013, and feels like one of the more masculine choices on this list. As a surname, Sterling comes from the word for the coin. And yet, the name is probably derived from sterre – star. Like Esther and Stella, nearly any star name feels like a possibility for a daughter. There’s also alternate spelling Stirling, and the avian name Starling. Another association? Mad Men’s original ad agency, Sterling Cooper.

Sullivan – Sullivan ranks in the US Top 1000 for boys. As of 2013, this name stood at #505. I’d have never imagined Sullivan as a girl’s name, until someone mentioned the possibility of Sullivan, nickname Liv. Suddenly, it seemed like a real possibility that this one could be gender neutral. 52 girls were named Sullivan in 2013, compared to the 532 boys, so while this name is solidly Team Blue, it’s not unthinkable for a girl.

Sumner – Summer has had a good run as a girl’s name, and Autumn and Winter have their fans, too. Sumner isn’t seasonal, though. Instead, it’s an occupational name for one who summoned witnesses to court. It’s rare as a given name. And yet, names that are just a little bit different can be popular with parents.

Sutherland – Easton and Weston are mostly for the boys, but how about Sutherland? It makes me think of Law and Order’s Serena Sutherland (played by Elisabeth Rohm, who named her daughter Easton). It’s originally a place name with ties to Scotland. It’s not the easiest name to wear, and there’s no meaningful data about anyone answering to Sutherland. But I’m putting on this list even if it’s a long shot.