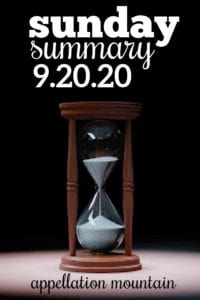 It’s a serious and silly question: What’s the statute of limitations on name associations?

I’m not talking about your personal feelings. If you knew a super-mean Dylan in third grade or if a Laura broke your heart, well, nothing I can say will convince you that Dylan or Laura is the right name for your kiddo.

But how ’bout name associations that other people might recognize?

My husband vetoed Coco because of the gorilla. I’ve heard people argue that siblings can’t be Kate and Leo because of this 2001 movie. Sometimes when I mention Maude, someone will respond with this Bea Arthur series, which ended in 1978.

Those are pretty trivial. And I’d argue that all of them, at this point, are sufficiently distant in the past to be ignored.

Other potentially problematic names follow a thread through history and culture. You can’t name your baby Adolf. Lucifer would be a burdensome name, no matter your personal beliefs. While Kate and Leo would be fine – or even Jack and Rose – siblings shouldn’t be Romeo and Juliet.

But there’s a big, gray area in the middle.

I recently found myself thinking about Unity.

It’s a cool, quirky name. It sounds like a sister for Harmony, a counter-culture pick that might’ve surfaced in the 1960s.

Except Unity Valkyrie Mitford – yup, her birth name – was born into an English aristocratic family in 1914. I’ve read she was named for actress Unity Moore; or maybe it was inspired by a wish for unity during war in Europe. Her middle comes from the operas of Wagner. None of that is particularly problematic.

Except we remember Unity Mitford for admiring and befriending Hitler, and supporting his policies and worldview without reservation. She was, by most accounts, pretty horrible.

Readers have suggested that Forrest is too closely tied to the Civil War Confederate General Nathan Bedford Forrest, an early leader of the Ku Klux Klan. Obviously, not someone to honor with a child’s name – to put it mildly.

But does that truly make the name off-limits? Forrest died in 1877. And while the pain and strife of the Civil War and racial injustice remains an open wound, I don’t immediately think of Forrest. Maybe it’s because I’m not Southern. Or maybe it’s just that I have a dozen other associations to offset that one.

Or could it simply be that over 3,500 boys have been named Forrest in the last decade alone – and that makes it a little bit like William or James. It’s just a little too common for one person to taint the name permanently.

I’m curious to hear what you think – when does an association strike a name from your list?

Confession: I’m wild about Cobra Kai, the YouTube-turned-Netflix series that revisits the Karate Kid. At one point, we learn that a key character’s middle name is Swayze – as in Patrick – and it’s just so perfect.

While we’re talking pop culture, can the Hyperions put Vista on the charts? The indie superhero flick is coming out … sometime soon-ish maybe? It’s pretty obscure, compared to, y’know, Marvel and DC Comics. But I’m captivated by character name Vista. Could it be the kind of word name parents embrace?

Who knows what the holiday will be like, but I’m already thinking about Halloween costumes. My daughter has had BUNCHES inspired by her name. And I can imagine LOTS of name-inspired costumes. How ’bout your kids?

All the baby name trends from the recent data release broken down. Some have been with us for a while, like mythological names + the Evers. But a bunch of these are new – check out all those Yas!

Nancy looks at the names that are VERY popular in a particular state. Such an interesting list! 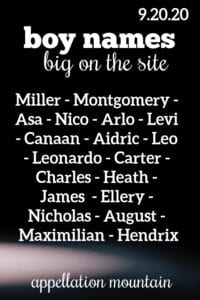 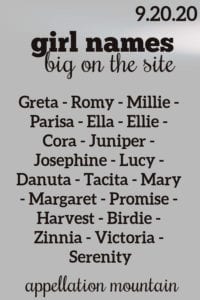