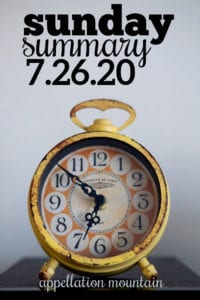 I tripped over this Apartment Therapy article defining – or attempting to define – the terms antique, vintage, and retro.

It turns out that furniture comes with some fairly standard-ish definitions. (Though they’re not necessarily used as such.) Or at least some generally agreed upon terms.

The article suggests that antique home furnishings are 100 years plus.

Vintage applies to an era. So Betty is vintage 1930s, while Susan is vintage 1950s. And Jennifer is vintage 1970s. For furniture, it should “speak of the era in which it was produced.”

Except … when it comes to baby names? I have a hard time hearing Susan as vintage. And Jennifer? No way.

Besides, names aren’t produced. A name like Olivia goes all the way back to Shakespeare – at least. So calling it vintage twenty-first century really doesn’t track … but I’m not sure I’d call it an antique, either.

So how ’bout retro?

Retro references styles of the recent past.

Okay, I’m with you. Except … 90s names aren’t retro in the way that 90s home furnishings might be.

Any thoughts on how to define these terms for names?

I use vintage and antique interchangeably. Though “vintage” is a compliment. And I often use “antique” to refer to names that aren’t quite back in favor. (Otherwise, they’d be vintage, right?) And retro? I think that’s almost always a twentieth-century name, often midcentury … but broadly defined.

Curious to hear your thoughts!

While you chew on that, here are some more finds from the last week:

I don’t think you should name your baby Lucifer. Seriously. I can count on one hand the number of names that strike me as truly, seriously problematic. To be clear, my hesitations around Lucifer aren’t about my personal beliefs. And I get it – the sound is gorgeous, the literal meaning appealing. Except … wouldn’t your jaw just drop if you saw it on a class list? Or a resume? It’s a recipe for a lifetime of “wait, that’s really your name, like your parents named you that?!” reactions.

Erm, wait. My list of don’t-go-there names might be getting longer. Once again, I completely get the appeal of Alibi. Cool sound. Edgy visual. But no … right?!

I finally watched Whip It, and oh – the roller derby names! But the real stand-out? Bliss, the name of Ellen Page’s character. See? I may have given the thumbs down to Lucifer and Alibi, but I really do adore rare word names.

Which reminds me … I like the name Ciara and Russell Wilson chose for their son: Win Harrison. You might say that Win is too much to live up to – and I get it, especially with such famous parents. But Win also seems like a name, because there’s Winston and Wynton and plenty of traditional names that shorten to Win … so I think it’s like Bliss. A perfect word to borrow for a child’s name.

And now for rarities from Quebec … I mean, a Top Ten featuring Felix and Rosalie is downright delightful. But check out those French – what else?! – word names: Bonhuer, Espoir, Allegresse.

Before we go, have you voted in the Very Last Round of the Great Summer Baby Names Showdown? The boys’ contest is here, and the girls’ final is here.

That’s all for now. As always, thank you for reading – and be safe! 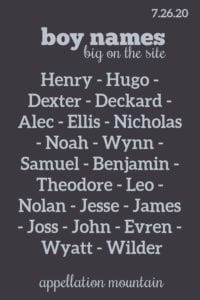 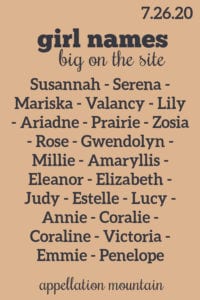