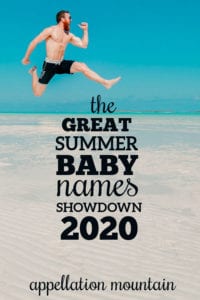 We’ve made it! After weeks of voting, we’ve narrowed the list down to just two names. That brings us to the final round for the boys in the Summer Baby Names Showdown 2020.

Every March, we host a March Madness tournament – only for baby names. We vote our way through the most popular names, as judged by the most-read Name of the Day posts at Appellation Mountain from the prior calendar year.

After a decade of March Madness contests, we had a gallery of winners.

So this summer, we took those names and let them compete for the crown – the champion of champions, the all-time reigning baby name all-star.

As always, it was your votes that took us from the starting point to the final match.

Before we get to our very last match-up, let’s take a look back.

Arthur bested Rowan with almost 53% of the vote. Arthur is a reader favorite here. Not only is it a past March Madness Baby Names victor, it also won our Harry Potter edition of the Great Halloween Baby Names Contest. But Rowan is a favorite here, too, so it’s no surprise that this contest was pretty close.

Theodore trounced Everett, with just over 60% of the total. Theodore might the hottest classic boy name of our moment, a fast-rising favorite with cool Theo and cuddly Teddy both available as nicknames. But Everett is also a top choice with parents, thanks to that middle V sound, combined with the T ending.

That means our final match-up is a battle of the classics!

Winner earns bragging rights as the winner of the 2020 Summer Baby Names Showdown and the all-time favorite of the March Madness Baby Names champions.

Voting stays open through Tuesday, July 28th. And don’t forget to vote in the girls’ final, too.

Check back on Thursday, July 30th to see which name wins!