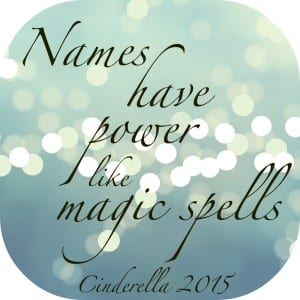 I took my daughter to see Cinderella, and I was surprised by how much I loved it.

Cate Blanchett’s stepmother reminded me of the stepmother character from Cinder – you don’t like her, but you kind of get her, even though she’s definitely the villain of the piece.

And that whole “Have Courage and Be Kind” line?

I’m on board with that.

But here’s why I’m talking about a Disney movie on a baby name blog: we sometimes forget that the character is named Ella, and  Cinderella is a cruel nickname given to her only after she’s gone from beloved daughter to mistreated servant in her own home. In the 2015 version of the movie, Cinderella claims the name as her own. It’s a lovely moment for the name obsessed.

Have you voted in March Madness 2015? It looks like defending champions Cora and Everett might both make it back to the final round! You can still vote in the boys’ semifinals here and girls’ semi-finals here through Friday, March 27th.

Oh, and one more note: thanks to everyone who has already subscribed – and read! – the first edition of the Appellation Mountain weekly newsletter.