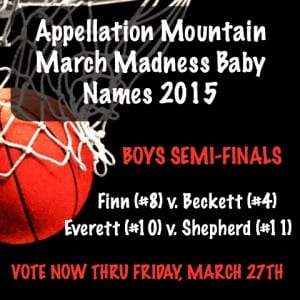 Were you paying attention to the matches over the course of the week? Because the quarter finals of March Madness baby names were truly thrilling! Some of these contests went back and forth more than once. Though let me tell you – it was nuthin’ compared to some of the matches in the girls’ quarter finals!

Which do you prefer: Irish favorite Finn (#8) or literary surname Beckett (#4)?

Any guesses as to which name will join Nathaniel, Arthur, Archer, and Everett in the winner’s circle? Do you think Everett could possibly defend the title?