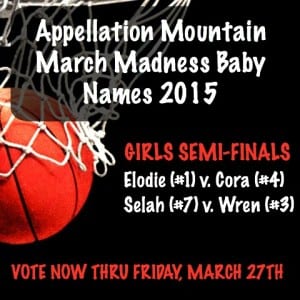 I’m not saying that the boys quarter finals of March Madness baby names weren’t exciting. They were, and none of the matches was a landslide victory.

But the girls quarter finals? Hoo nellie! Every vote counted. No name won by much more than six percentage points, and one of the matches was decided by less than a percent!

Do you prefer fancy French Elodie (#1) or spare and elegant Cora (#4)?

Any guesses as to which name will join Louisa, Genevieve, Isla, and Cora in the winner’s circle? Do you think Cora could possibly defend the title?