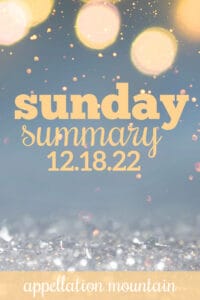 As the end of the year draws near, it’s time for plenty of 2022 retrospectives, along with lots of prognostications for the year ahead.

Thanks to Caroline for featuring my thoughts on the Next Big Names of 2023, along with some other really talented namers!

You can read my full lists of the Best Names for 2023 here:

The one name I almost instantly regretted not including for the girls? Wednesday! I think the new Netflix series is going to help this name go mainstream, in a big way.

Will it bring other calendar-inspired choices with it? I’m a sucker for Tuesday … and January.

OH! The Name of the Year is Volodymyr. So powerful, and every word of Laura’s write-up is worth reading.

A woman’s name was found in the margins of an eighth-century manuscript. This raises plenty of questions. Who was she? Why did she mark her name so subtly, with a technique that was more like carving than writing? My question, of course … what was her name? Eadburg. The German Eda means oath, while -burg refers to a castle or a stronghold. (Plenty of -burg names are listed in A Dictionary of Medieval Names from European Sources.)

Back to the present! Luna + Levi make Baby Center’s list of Most Popular Names for 2022. That makes me think that both names could be headed for the US Top Ten. I’m pretty confident about Luna. Other interesting names that rank (way) higher on BC’s list than they do in the official US version: Kai, Waylon, Asher for boys; Nova, Aurora, Athena for girls.

Love this question on Swistle: what would you name a sister for Iris and Cleo? It’s tempting to see it as a pattern to complete, but I find myself cheering for the couple’s choice of Sybil, even though it’s not four letters long.

Behind the Name just added yet another long list of names to its nearly bottomless database. I am here for Berith, Elvi, and Zeb, but the entire list is worth a scan.

That’s all for this week! As always, thank you for writing – and see you next week! 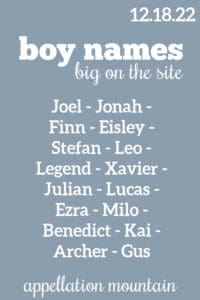 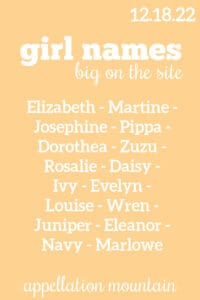