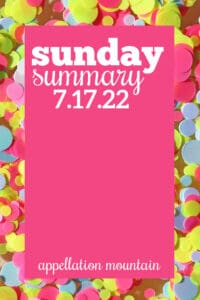 It’s the parent that gets frustrated when her freshman year roommate names her kid Eloise, too.

But here’s the opposite question: when is a unique name a bad idea?

But many names feel unique. They’re so rare that your child will be the first Joliette or Zierre in their school. Or workplace.

And that has its downsides, too.

Here’s the one I want to mention today: it’s very, very easy to be misunderstood.

To find yourself repeating and clarifying and spelling that name again and again. And still sometimes being met with blank stares. Or even a raised eyebrow.

I’m very aware of this shortcoming right now. My daughter is headed to a new school in the fall, after spending pretty much her entire life on the same small campus. So there’s lots of introduce – repeat – clarify.

It’s not necessarily an issue. My daughter – who can be shy – does it automatically, because, well – it’s been this way her entire life. Also, she likes her name. And me? I’m outgoing and friendly and love to talk to strangers. It’s the opposite of a problem.

But it is effortful. Since my son’s name has been in the Top Ten in recent years, we have the opposite experience. People expect it. They hear it without a second thought.

And while I don’t regret the name choice, I do envy that smoothness.

Sometimes I think we talk ourselves out of popular names. We worry they’re too basic. Our kids will dislike them. They’ll blend into the crowd. And that’s possible.

But in a world with so many moving pieces, there is an upside to introducing yourself as Ava or Mary or Brooklyn and having it be understood without a pause.

The characters in Disney-Pixar’s 27th animated film are named Ember and Wade. Elemental doesn’t come out until 2023, but I’m keeping an eye on them both. Nature-associated names with a boost from the studio that brought us Arlo and Luca? I’m paying attention.

Numbers 7 and 10 are completely me. I try so, so hard to not ask expectant parents if they’ve thought about names yet. But, well, I’m human. And weak. And I really do just want to help! As for ten? Ten is just for fun.

Peru’s most popular names list isn’t divided by gender. Wild, right? Of course, the names themselves are heavily gendered. But the best part of Nancy’s post? Scroll to the bottom for lists of names drawn from indigenous peoples and their languages. I am now very much on the lookout for someone named Wasan.

How great is this sibset: Coco Eloise and Kenzo Goodman? Celebrity baker Amirah Kassem and her husband welcomed their second recently. Creative, high-energy names just make sense for the author of “The Power of Sprinkles” and founder of Flour Shop. (I realized we walked right past the bakery when we were on our California trip and I’m kicking myself! Next time!)

Three names have become very standard in the birth announcements at British Baby Names. Could four the new three? A recent list included Aurora Fleur Irene Bide, a sister for Ottilie Leonora Rose Delap. I don’t object – at all! – but I do wonder about the thinking.

Can’t get enough name talk? Sign up for the weekly newsletter, sent every Tuesday.