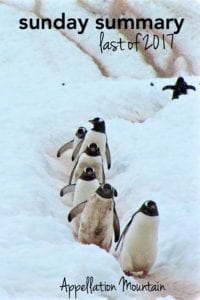 The year is slipping away by the minute!

I mean, I guess that’s always true, every minute of every day. But I can count it on my fingers now, and that makes it seem really real.

We’ve had a pretty low-key holiday – no airplanes! No week-long stays in hotels while cramming in visits to various family members. And, mercifully, no one has been sick. (Knock on wood. We’re not quite done with 2017 yet, are we?)

But because our families are all spread out, we did find ourselves over the river and through the woods. At one point, we landed in the Tomcat Cafe, located in the heart of tiny Sinking Spring, Pennsylvania. Should you find yourself in Berks County, run – don’t walk. It was that good.

I mention because a) it was so very delicious, but really b) because of a name story. I’d been wondering about Tomcat ever since my brother told me where we’d be meeting. As we finished our breakfast, I asked our server about it. Nearly everything in the tiny cafe has a music-themed name. You can order the “Shine On You Crazy Diamond,” the “I’ll Stop the World and Melt With You,” or the “Cherry Bomb.” So was I missing a famous song or musician?

Nope. Turns out the owner named the restaurant for his grandfather, Tom. Apparently he whittled wooden cats – or somewhere earned the nickname Tomcat.

Great names have meaning – meaning that we might not even always understand in our lifetimes.

That’s all for this week. (And this year!) As always, thank you for reading – and have a great week!