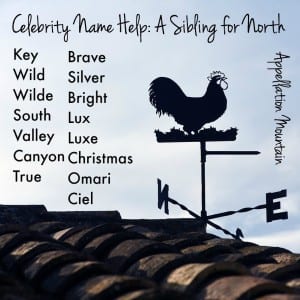 The other afternoon I was flipping between draft name consultations and the news that Kim and Kanye were expecting their second child. I found myself wondering what I’d say if the famous couple wrote in for #namehelp. I mean really thinking about it. Because while it’s easy to be flip and dismissive of the name they chose for their daughter, I do think every family’s name choices deserve respect. And … well … once you’re named your first child North West, it’s tough to come up with a name for another kiddo!

Do I need to add the disclaimer that Kim and Kanye haven’t asked me for help? They haven’t! But if they did, this is what I’d say.

Congratulations on baby #2! I know this has been a long road for you, and it’s lovely to hear that you’re expecting.

Naming a baby is always a project, but your daughter’s name is such a standout that it presents some specific challenges. You need to find a name every bit as distinctive for North’s little sister or brother.

Here’s what I think you’re looking for in a name:

Style matters for your family, and your children will grow up in a creative home. Families of artists and musicians often feel like the sky’s the limit when it comes to naming a child, and I imagine that’s how you’ll approach choosing a name.

Let’s take a look at two types of names: ones that play on your surname, and those that don’t – but still pair well with big sister North.

Names that form a phrase with West:

I’m curious to hear if readers think you should stick with a play on West for your second child’s name, or if it’s best to move on, so let’s have a poll. 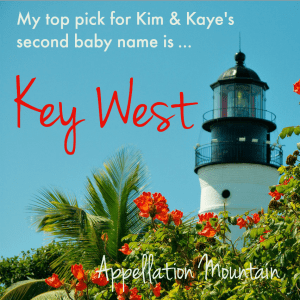 For me, I kind of love the idea of Key. Yes, it’s another play on the surname West. But hey, as I often say about celebrity kids with very different names, it’s not as if this will be the strangest part of their childhoods. (I’d say that having the paparazzi and gossip websites put your parents on “bump watch” might be stranger. And then having baby name bloggers discuss your choices, well … that’s not really normal either, is it?)

But if you prefer to go another direction, I love the sound of True or Lux for a daughter, and Brave or Rock for a boy.

If you were offering kind, constructive advice to Kim and Kanye, what would you say?