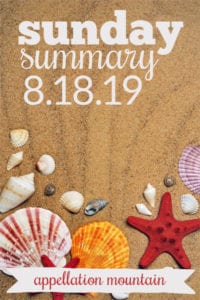 The endless resources available to help you think through the best possible name for your child.

One of the biggest challenges to naming in 2019?

Yup, you guessed it. Same thing!

Information is a marvelous thing. But it can overwhelm, and leave us feeling unsatisfied with any choice. Because … what if we left a stone un-turned? And the perfect choice was waiting, right THERE, if only we’d looked a little longer?

Sigh. I get it. Naming our second child was a Project, because I felt I’d been a little too quick to settle on our firstborn’s name. (Spoiler alert: I love both kids the same, and, after many years, realized that I love both of their names equally, despite feeling that one is a Much Better Name. And I can’t resist tinkering with what we could-have-should-have given our son for a middle name. But only in my head. Or, well, sometimes I tell him, and he says “I’m so glad you didn’t name me that.”)

That’s why there’s value to setting a list of qualities you’d like in your child’s name before you really hone in on your favorites. And the best way to think about those qualities? Consider your own experience. Did you dislike being Ashlie-with-an-ie? Or love having an unusual name? Was your partner frustrated by an out-there family middle that he refused to reveal, wishing the W stood for William instead of Winthrop?

The list is long and different for everybody. But what would you put on it? What qualities were make-or-break when choosing your favorite names for your children?

An exhaustive list of money-inspired baby names offers up more than a few gems. A few of these – like Penny and Cash – are obvious, but lots of them strike me as subtle. Millie, Jackson, Prosper, Jewel? Oh, and Gem, too, of course. Lots of great finds. Also, any time a personal finance writer can talk about Lil’ Wayne and Saint Augustine in the same piece? Totally worth a read.

Have you ever read a book and found that it re-shaped the way you think about a name? I’ve always had an irrational dislike of the name Fallon. Maybe because I first heard it as a character name on Dynasty, when I was (secretly) watching the grown-ups watch Dynasty, and it always struck me as too much name for a real person. That feeling lingers, even though, objectively, I appreciate the name’s qualities. And then I read Nora Roberts’ Year One, which features a Fallon – and I found myself seeing it in a fresh light.

What would you name boy-girl-girl triplets … if you didn’t know you were expecting until you were rushed to delivery at 34 weeks? True story. A South Dakota mom thought she was experiencing kidney stones when it was actually labor. Crazy, right? But it was labor with triplets. Whoa! They named the kids Blaze, Gypsy, and Nikki.

Daphne Oz might be my favorite celeb baby namer of the moment. She and husband John Jovanovic recently welcomed daughter Giovanna “Gigi” Ines, a sister for Domenica Celina, Philomena Bijou, and Jovan Jr. Those are some lovely, romantic names. And I’m a sucker for a planned nickname, too.

An update on a past #namehelp post: Welcome Andrew Lewis, a brother for Patrick and Caroline.

What was your almost-name as a baby? This is one of my favorite questions, and DesignMom just asked it. The comments on her post are so worth a read.

We never tire of French girl names. At least, this post has remained one of the most-read lists here, ever since it was first posted … way back in July 2008!

And, of course, let’s take a look at the most searched-for names trending on the site this week. It’s forever a fascinating list … 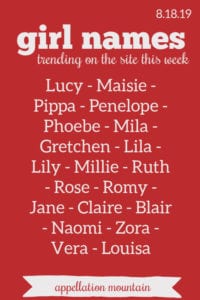 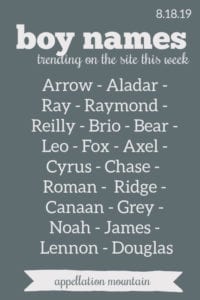 That’s all for this week! Thank you, always, for being here – and have a great week!

Image by croisy from Pixabay