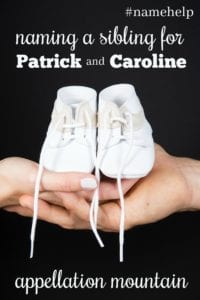 UPDATE: Welcome, Andrew Lewis! And thanks from Julie + family for the help with the decision.

We are expecting our third child, sex unknown, in October. Naming our first two didn’t seem this hard. They are Patrick Hunter (my maiden name) and Caroline Joan (his mom’s name). The kids are always Patrick and Caroline, at least outside of our house. (We have lots of silly names for them, but nothing I’m writing on a school form.)

Our last name is Czech, and while it’s not that unusual, it’s long and not especially easy to pronounce. I think that’s why we settled on such traditional first names. Because our last name ends with an ‘a’, we’ve ruled out names ending with an ‘a’. And while we like classic names, we have avoided the most common – John, Elizabeth, Mary.

Middle name options are Louise for a girl or Lewis/Louis for a boy. (Lewis is a family name.) We don’t want to use Louise/Louis as a first name, because of potential family issues. For the same reasons, I think some form of Lewis almost needs to be this child’s middle name.

My husband likes Henry, but I used to work with a horrible Henry and I can’t get past it. I suggested Alexander for a boy, but we’d have to shorten it to Alex, and I’m not sure I like that with Caroline and Patrick. And naming him just Alex seems incomplete. Or am I just being too strict with my rules?

For a girl, I wanted to like Anna, but I don’t know if it works with our last name, Anne seems a little short, and Annabelle isn’t really my style. My husband likes Katherine, but I think we’d have a problem with Kate. Plus, it was almost Caroline’s name, so I feel like I’m over it. He also suggested Clare, but I don’t want to repeat initials.

We would love some new suggestions!

Nearly everything in parenting gets easier with experience, but naming? Often, it’s exactly the opposite. The choices we’ve made for our first children rule out possibilities for their siblings. And being a parent means being aware of what other people are naming their kids, and how names are used in the wild. So we know more, and in this case, it can work against us!

Let’s focus on what you want: a traditional given name that doesn’t start with C or P. The name should work well with some form of Lewis as a middle name. And then there’s the most challenging part: a name that isn’t likely to be shortened. That rules out Benjamin and Charles, names that almost inevitably become Ben and Charlie. Elizabeth strikes me as another name that we all automatically reduce.

The good news is that I also know lots of kids who are Sebastian-not-Seb, Isabella-not-Belle, and Katherine-not-Kitty. It’s perfectly possibly to use many names nickname-free today.

Still, you’re smart to consider it when choosing a name. Is it too rules-y? Maybe. But names really come down to personal preference. If you find yourself loving a name that breaks a rule, then by all means, let it go. But if sticking with your guidelines make it easier to decide? Then that’s absolutely fine.

I do think you’ve got plenty of good options, even with the constraints you’ve listed, so let’s dive right in:

A Sister for Patrick and Caroline

Alice – Alice and Caroline both appear in the current US Top 100, but I wouldn’t call them too popular. They’re both nicely classic names. And Alice is very unlikely to be shortened. Patrick, Caroline, and Alice Louise work beautifully together!

Elise – If Alice isn’t quite right, and Elizabeth seems too common, might Elise work? There’s something about it that reminds me strongly of Caroline. And while it started out as a short form of Elizabeth (or, I suppose, Elisabeth), it claims a long history as an independent given name. (Beethoven composed “Für Elise around 1810.) While Elizabeth practically begs to be shortened to Lizzie or Beth or Betsy, Elise feels tailored and nickname-resistant.

Frances – No list of classic girl names would be complete without Frances. It’s a name both sweet and strong. The Italian Francesca takes the name in more elaborate direction, but I think it’s just Frances that pairs best with Caroline and Patrick.

Grace – Grace strikes me as a traditional name that happens to be rather popular at the moment – it’s currently in the US Top 25. But I still think it feels timeless, traditional, and sophisticated, too.

Mary – I know! You have Mary on your too-common list. But consider this: Mary has not appeared in the US Top 100 in nine years. Nearly a decade! You’re far more likely to meet a child named Hazel, Stella, or Zoe. Everyone recognizes it, it’s effortless to spell and pronounce, but no one is using it for a child – kind of perfect, right?

Meredith – Meredith might not feel quite as classic as Mary, but I think it fits this category. Like Caroline, it’s on the longer side, without being too frilly or elaborate.

A Brother for Patrick and Caroline

Adam – Adam feels slightly off-trend in 2018, but that’s a good thing! Names like William and Henry and James are stylish classics at the moment, while Adam (and Patrick) are overlooked. But that takes nothing away from their potential appeal.

Franklin – I have Frances on your girls’ list, and almost put Frances here. But I wonder if Franklin – two-parts presidential, one-part Peanuts might be the better fit? You might shorten Franklin to Frank or Frankie, I suppose, but it sounds so much like all of those two-syllable, ends-with-n names we love for boys that I doubt anyone would.

Lionel – If you love – or don’t mind – the alliteration of Lionel Lewis, I think it makes for an unforgettable name. Leonard would be Leo or Lenny, but Lionel seems likely to be used in full, a name that marries the traditional with our current affection for animal-inspired names.

George – Ever since Prince George arrived in England, parents have warmed to this traditional boys’ name. It’s much too storied to feel forever tied to the throne – after all, we’ve got George Washington, to name just one of the many famous figures to answer to the name. But the little royal did remind us of how charming the name can be on a child, while still feeling plenty sophisticated for a grown man, someday.

Matthew – Not so long ago, every Matthew was a Matt. But these days, I feel like Matthew works well in full. It might be my favorite match for Patrick and Caroline, a traditional name that feels surprisingly fresh and new when used in full.

Vincent – Vincent van Gogh was Dutch, but Vincent tends to read as a traditional Italian choice in the US – just like we hear Patrick as Irish. Still, I think it counts as a bona fide classic, one that is particularly handsome when not shortened – though Entourage will forever remind me that Vince can be rather handsome.

Overall, my favorites are probably Matthew and Frances – that is, if I can’t convince you that Mary is the opposite of too common.

Readers, what would you suggest as a sibling for Patrick and Caroline?