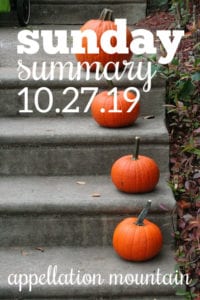 I love my daughter’s name, every bit of it. As time has passed, I’ve found reasons to love it even more. But despite having no reservations about our choice, I did experience the strangest pang of regret the other day.

Our daughter is Claire Caroline Wren, called Clio. Claire is the most significant name in my mother’s family, and by a twist of fate, one of my siblings married into a family with the surname Clare. And so we’d always wanted to call her something else. Devoted nicknamer that I am, I landed on Coco, only to come up against a spousal veto. (That’s a gorilla, he insisted. Ancient history, I countered. But he would not be swayed.) I loved the idea of Callie, but our son shortened his name – Alexander – to Aly. So, no. We eventually landed on Clio, and it’s the right choice.

But the other day, I was thinking about how much I like Clary, rhymes with carry and wary.

We didn’t consider it, because my father’s mother – my grandmother – called my mom Clari. Probably because my dad did, too.

And, of course, the Mortal Instruments had not yet given us Clarissa “Clary” Fray. The supernatural series debuted in 2007 with City of Bones.

It’s too bad, because Clary would be a great nickname, every bit as good as Clio. But at the time, Clary/Clari felt taken. Today that’s no longer true. My father and grandmother have been gone for years; my daughter has never met them. And in their absence, it’s quite rare to hear anyone refer to my mother as Clari.

The name became available again, but it didn’t seem like an option when our daughter was born.

So here’s what I find myself thinking: for every parent hesitating to choose a family name for fear of duplicates causing confusion, well … it’s a season. If we’re really lucky, it’s an extended season, decades and decades long.

Families change. Names evolve. It’s worth asking yourself how you’ll feel about your choice far into the future, not just in the first months and years. Because naming? It’s a long game.

Football names have proven influential time and time again, so how ’bout Gardner? Gardner Minshaw is a rookie quarterback for the Jacksonville Jaguars. I don’t really understand much of this SI article – except it sounds like he’s kind of a big deal. With names like Brady, Peyton, and most recently, Baker catching on thanks to football MVPs, I can image we might hear more of Gardner, too.

After all, it’s part of the trend Laura Wattenberg called “names that do.” Though I think some names – like Fielder and Ranger – seem a little more wearable than Shooter. (Thoroughly discussed last week.)

I missed this late summer HuffPost round-up of reasons people changed their names. The interesting part to me? One Cathy became Catherine. Another Mary Theresa became Teri. There’s no right answer when it comes to skipping the formal name or embracing nickname-rich choices.

Are two middles the new norm? The British Baby Names birth announcements almost have me convinced … Or maybe I’m just swooning over the sheer loveliness of combinations like Georgina Elisabeth Nella and Percy Alfred Hugh. Also, welcome baby Wilbur, a sibling for Ottilie and Isadora – and yup, all three kiddos are triple named!

Nancy talks about the rise of Aeris and Aerith, intriguing stories in their own right. But I’m curious because lately I’ve been thinking about Aerin, which starts to appear in the US popularity data in the 1970s, around peak Erin. Cosmetics company heiress Aerin Lauder was born in 1970; she’s helped boost the spelling since, thanks to a fragrance that bears her name. And maybe Aerin Lauder’s chic, upscale lifestyle brand is what makes me think Aerin fits with Isobel and Katharine. 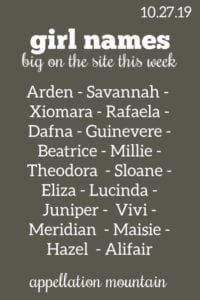 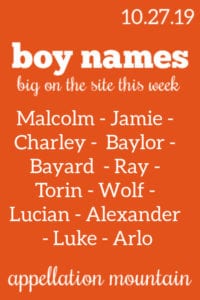 Image by Jonathan Singer from Pixabay