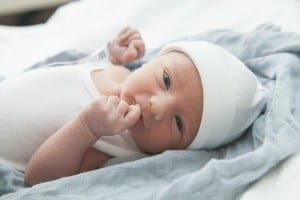 Please join me in congratulating Melissa and her husband on the arrival of their new son, Brooks Roosevelt. His middle name is after grandmother Rose!

What a great name. Thanks to all who made helpful suggestion in their #namehelp post.

Seriously, could he be any more adorable? I’m reminded of something Melanie Wilkes said in Gone With the Wind: “The happiest days are when babies come.” So true!