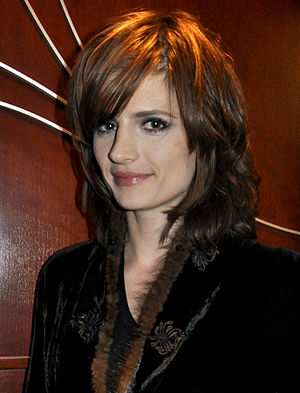 She’s known as Kate on Castle, but where did that lovely actress get her given name?

Thanks to Kyla for suggesting Stana as our Baby Name of the Day.

At first glance, Stana looks like a feminine form of Stanley and Stan.  I’d bet that at least a handful of little girls christened Stana were honoring a Stanley somewhere in their family tree.

But there’s a whole other story here, too.

Stana Katic plays Kate Beckett on detective series Castle, and has had roles in plenty of films and television shows, including Heroes and 24, and a small part in the James Bond flick Quantum of Solace.  But it is the ABC series that made her a star.

Katic’s parents are Serbian.  They immigrated from Croatia before Stana’s birth.  The family moved to Canada first, and later to Illinois.  She’s the firstborn in a big family, and I’ve heard that she was named after a grandmother.  (But then, I’ve also read that her middle name is Jacqueline, something that her official site dismisses as a bizarre rumor.)  She pronounces her name something like Donna – listen here.

So what does Stana mean?

It’s a Slavic element meaning stand.  Stanislava is a traditional choice for girls in several Slavic languages, and Stana is a short form.  While there wasn’t a Saint Stanislava, there have been plenty of saints Stanislaus, lending more substance to the name.

The asteroid Stana was discovered in 1998, and named after Stanislava Setvakova, a member of the Prague Planetarium staff.

There’s also a river in Romania by the name, and a few villages – but I’m not certain if their name shares the same origins.  A handful of Romanian women answer to Stana, too.

So that’s where she comes from.  But how would she wear in 2013?  Five girls received the name in 2011, possibly inspired by Katic, or maybe by family members of their own.

On the one hand, the name feels like a mash-up of favorites like Stella and Anna.  Stana fits right in with lots of short, ends-with-a names – from Kayla to Clara, Maya to Sarah.  She’s more wearable than Stanislava, and works better than Stanka, another diminutive form.

And yet Stana still bears the stamp of an import – a name that is unfamiliar to most in the US, and might require some explanation.  That’s a bonus for many a name nerd, but it might not be pleasing to all.

Overall, you can’t call quite Stana on-trend, and I doubt she’s likely to be the next Gemma.  But she’s nicely wearable – the perfect choice for parents after a Slavic heritage choice that feels wearable in English.