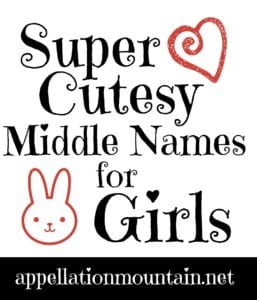 Daring middle names are great.  They can plus up a conventional first name, honor a hero or a loved one, nod to a heritage or otherwise add meaning to your child’s name.

But how about cutesy middle names?  Maybe they’ve always been around, but in recent years, there’s been an uptick in super-cute middles for girls.

What do I mean by cute?  It’s more than just a diminutive name – Molly or Sadie would be unconventional in the middle spot, but they work just fine, as do short choices like Jo and Belle.

I’m thinking of names that aren’t quite names – borrowed from baby talk, sometimes known as a hypercoristic.  They’re pet names used for a loved one, but rarely seen as given names.

Until now, when a surprising number of terms of endearment are finding their way on to birth certificates.

I’m not sure what to think of this trend.  On the one hand, I’m all for a bold, unconventional middle.  On the other hand, would I want a super sweet middle myself?  No.  Not really.  Even some of the Lalaloopsy doll names are slightly more wearable.

So proceed with caution, but if this style appeals to you, there are options aplenty – and you won’t be alone.

Ballerina – Actor Jeremy Sisto is a master of the daring middle.  He and wife Addie Lane are parents to Charlie Ballerina and Bastian Kick.  I’m not sure if Ballerina counts as a super cute middle, but with images of tulle and toe shoes, I’m adding her to the list.

Boo – Short middles are great, and choices like Ann and Lynn are common.  But Boo has no history as a given name.  In Monsters, Inc. the little girl is called Boo – but that’s clearly based on a misunderstanding.  Celebrity chef Jamie Oliver and wife Jools have a daughter called Daisy Boo Pamela.

Bunny – There have been plenty of girls and women nicknamed Bunny, but Bryan Adams and Alicia Grimaldi went with Mirabella Bunny for their firstborn daughter’s name.

Darling – Documentary filmmaker Jason Russell has a daughter called Everley Darling.  This one feels more name-like to me.  Blame Lady and the Tramp.  Lady misunderstands her owners’ affectionate names for each other, and believes that she lives with “Jim Dear” and “Darling.”  Or possibly because Darla has a long history of use.

Dot – I always loved the outrageous designs of Anna Ryder Richardson of the BBC’s Changing Rooms, the original Trading Spaces home re-design show.  Her daughter’s names have stayed with me, too: Bibi-Belle and Dixie-Dot.  I’m not sure if hyphenated names qualify for this list.  And Dot wouldn’t raise an eyebrow if it were, say, Elizabeth Dot.  But Dixie-Dot sounds like an animated critter, not a real girl.

Honey – Kate Winslet made headlines for naming baby #3 Bear, but her firstborn has a sticky sweet middle name straight out of the dictionary: Mia Honey.  If you’re thinking Honey has more history as a given name, you’re right – even before Ursula Andress played Honey Ryder in 1962 James Bond flick Dr. No.  73 girls received the given name Honey in 2012, and Jack Nicholson and Danish model welcomed a daughter by the name in 1981.  Still, I think she belongs on this list of names better left as terms of endearment.

Lou – She can be a completely respectable middle – think Katherine Lou – or a too cutesy middle.  Imagine Lexi Lou or Libby Lou.

Kitty – Comedian Louis CK has a daughter called Kitty.  As a nickname for Katherine, I find Kitty charming and Kit stunning.  But she has history as a pet name, too, making Kitty the kind of super cutesy middle name that belongs on this list.

Pixie – Yes, it’s the name of one of Bob Geldof’s daringly named daughters.  And Pixie isn’t completely unheard of as a given name.  But she still seems more affectionate nickname than appropriate middle.

Poppet – One Direction’s Louis Tomlinson became a big brother – again! – earlier this year, when his mom welcomed twins Ernest Rupert Atholl and Doris Poppet.  Poppet is an older form of the word puppet, a word that means doll.  In American English, it’s slightly obscure, making it a cutesy middle that might be more wearable than some.

Sugar – There are people out there with the last name Sugar, and a handful of girls – plus a few boys! – have been given this as a first name.  But Sugar also works as a super sweet middle, more obvious than many a candy name.

Sunny, Sunshine – Adam Sandler has a daughter named Sunny, and Sunshine cracked the US Top 1000 in the 1970s.  They’re cutesy middles, but in our nature name moment, possibly less burdensome than Poppet.

Sweetheart – Tobey Maguire and Jennifer Meyer welcomed a daughter called Ruby Sweetheart in 2006.  It’s one of the first cutesy middle names I noticed, but there’s a story behind Sweetheart.  Jennifer’s grandmother had always called her Sweetheart.  When she passed away shortly before Ruby’s birth, the unconventional middle became a way to honor her memory.

Treasure – Like Pixie and Honey, there have been real girls named Treasure.  And I’m divided on this one.  Is she more like noun names Serenity or Patience than cutesy choices like Sweetheart and Bunny?  I’m not sure … but that just shows how thin the line can be between daring middle and they named her what?

What do you think of super cutesy middles?  Would you ever consider a middle name like this for a daughter?  What about a first name from this group?