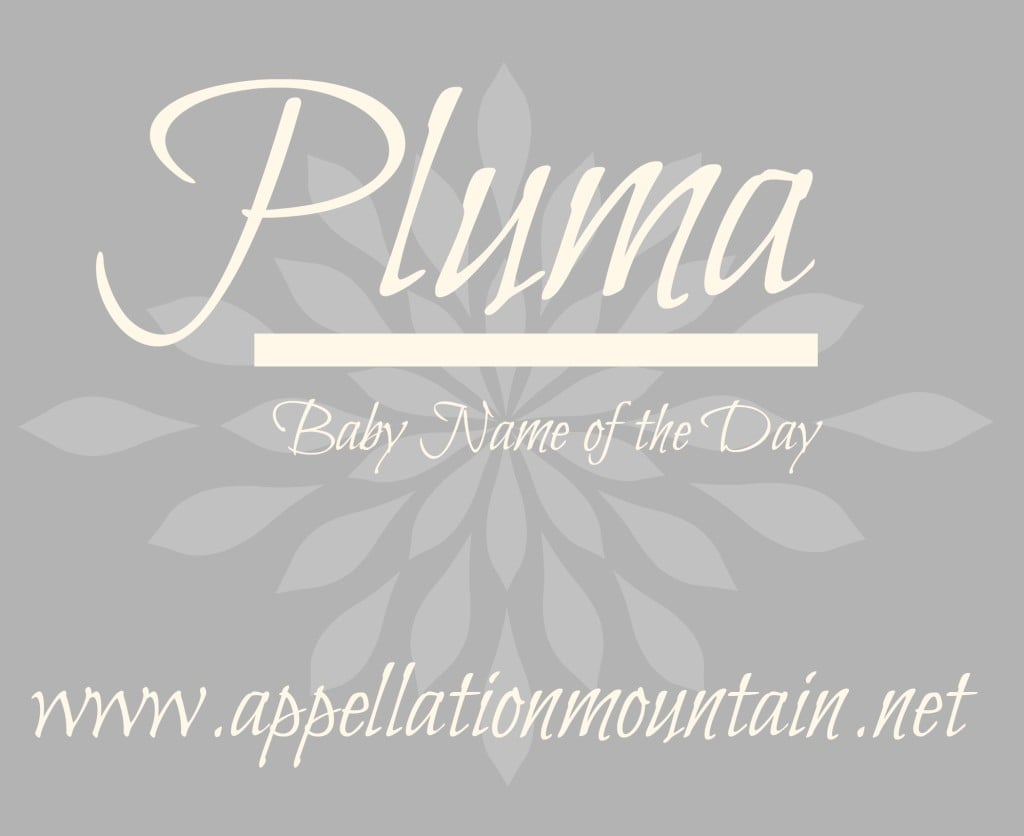 She’s a rare and writerly name that might have botanical ties, too.

Thanks to Alexandra for suggesting Pluma as our Baby Name of the Day.

First: a thought.  Names like Pluma may be disappearing.

Think about it.  If a name has been coined since the 1960s or 70s, it is traceable.  Yes, it might take some digging to find the perfume or the minor sitcom character.  But it is findable.

Message boards and forum posts, blogs chronicling this trend or that have the last decade or two covered.  There’s no mystery to Miley.  We might have the occasional curiosity, but they grow more and more rare.

But then the numbers drop, and 1951 is the last year that five girls received the name.  Since then, there have been fewer than five Plumas born in the US each year – maybe even zero.

Hannah found her on a gravestone in Connecticut.

My best guess is that she comes from the Latin word for feather.  Think of plume and plumage.  It’s also used in Spanish.  Plumas County, California, gets its name from the Feather River – Rio de las Plumas.

Plumes were, of course, once more common objects.  Quills were still in use as writing implements into the nineteenth century, and plume remains the French word for pen.  (Think of nom de plume.)  This puts Pluma in the company of literary names like Novella and Fable.

Or maybe she’s an ornamental choice, along the lines of Pearl and Rose.  We were once so fond of using feathers to trim hats that we still use the expression “a feather in my cap.”

But is that the source of the name?  Two other names pop in the late nineteenth and early twentieth century records: Plumie and Bluma.

Plumie makes me think that the feather association is the right one.  After all, names rise in clusters, and we’d expect to find Pluma and Plumie both inspired by the word, just like we have Madeline and Madison and Madalyn all ranking in the US Top 1000 today.  I found a few girls named Plumma, too.

Bluma is a Yiddish name.  It means flower – think bloom.  It’s not much of a stretch from Bluma to Pluma.  But Pluma wasn’t a typo – I’ve found plenty of Plumas mentioned multiple times, including a Pluma Fidelia – a combination I just had to share.

Then there’s the Irish word pluma, which means plum.  Plum has surfaced as a girls’ given name in recent years, most often as a daring middle.

While Pluma has slipped out of use in recent years, eleven girls were named Feather in 2012.

Chances are that Pluma was a fanciful borrowing from feather, a name that had the briefest moment in vogue.  It does still feel like something is missing – a song or a poem, something to inspire parents to borrow Pluma for their daughter’s names.  Today she’d be even rarer, an antique with an elusive history.