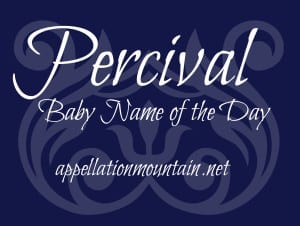 If Arthur is on the upswing, how about his fellow Knight of the Round Table?

Thanks to Bertram Bergamot for suggesting Percival as our Baby Name of the Day.

In 2013, eight boys were named Percival.  That’s pretty much the norm.  Back in the 1920s, there was one year when more than two dozen Percivals arrived – but that’s not exactly a trend.

Still, this name has history aplenty, and many names that claim similar roots have become quite popular.  Besides Arthur, there’s also Morgan and Gavin.  Even Guinevere has been more frequently used.

The story begins in the 1100s, with Chrétien de Troyes.  de Troyes penned an entire poem about the knight: Perceval, le Conte du Graal.  The author claimed to be working from an earlier source, and it is possible he took the hero’s name from the Welsh Peredur.

There’s more than one Peredur in earlier works, including Geoffrey of Monmouth’s not-exactly-historical Historia Regum Britanniae.

Percival’s big claim to fame is that he sought the Grail, though the story has changed considerably over the centuries.  In most tellings, he’s raised in the forest, kept sheltered by his mother, but always knowing his destiny is to become a knight.  He’s usually of noble birth, though in the BBC’s Merlin, Percival is a commoner of uncommon abilities.

Sometimes he’s a sidekick to Sir Galahad, son of Lancelot.  In some tellings, he dies after finding the Grail.  In others, he marries Blanchefleur and their son Lohengrin goes on to have adventures of his own.

Percival has featured in many a re-telling, sometimes barely recognizable:

Other notables Percivals are few and far between, but there is:

Speaking of Percy, it works well as a nickname, but actually derives from Perci, a place name in Normandy, and later a surname that became a given name – think Percy Bysshe Shelley.

Likewise, Perry is a possible nickname, but actually comes from the given name Harry, via the Welsh ap Harry – son of Harry.

Altogether, Percival is an obscure rarity that would take a certain amount of style to wear well – but could, in our age of Sebastian and Jeremiah, wear well.

What do you think of Percival?  Is this name wearable today?