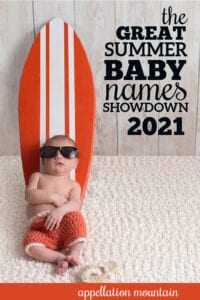 If it’s July, then it’s time for the New Names Showdown!

Every year, the US Social Security Administration releases the 1000 most popular names. Some of them are brand new to the rankings, debuting for the first time ever. Others return after an absence. It’s usually a few dozen names for each gender. I take that list and winnow it down to just sixteen favorites – eight for boys, eight for girls.

And then it’s your turn!

Together we vote our way through those eight until we have just one winner.

We have a pretty good track record of choosing New Names Showdown winners that go on to succeed in the US popularity charts, especially for boys. The winner of 2021’s contest will join past champs like Wilder, Wells, and Archie.

Last week’s results are in!

Everest swept past Rio, with just over 64% of the vote. The two nature-inspired names both seem likely to rise in use. But Everest’s resemblance to Top 100 favorite Everett might’ve given this name the edge.

Adler knocked out Jones, with just over 64% of the tally. This one surprised me just a little. Maybe it’s because Jones seems like a possible future Wells, Hayes … or Jonah. But then again, there are just as many compelling reasons to imagine that Adler could catch on, too.

In the final match-up, Zev bested McCoy with over 68% of the total. It’s tough to beat those high-value Scrabble letters!

The next round starts now. And it doesn’t get any easier!

The contests will remain open through Thursday, July 22nd. Please come back next Saturday to see which names win! And, of course, to vote in the next round.