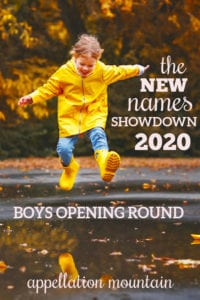 It’s the boys’ opening round in the 2020 New Names Showdown!

What, precisely, is the New Names Showdown, you ask?

Every year, when the Social Security Administration releases the Top 1000 most popular baby names, there are newcomers. (And some that leave.) Some of the newcomers have been on the list before, but others are first-timers.

For calendar year 2019, a grand total of 50 boy names returned to the rankings or debuted on the list. Read them all here.

We take that information and try to choose the names most likely to catch on in a big way in 2020 and beyond.

Our track record? Not too shabby.

This year’s contest starts with eight promising names. The one with the highest ranking becomes the #1 seed, all the way down to #8. Just like in any respectable tournament, the highest seed faces the lowest.

What happens from that point? Well that’s up to you!

Mini Mac faces off against the eternal city.

The Hate U Give’s Sekani is up against auspicious number name Seven.

Irish surname Callahan or the French version of Killian?

It’s the battle of the B – surname Banks or saintly Blaise?

Check back on Thursday, October 8th to see which names advance to the next round – and, of course, to vote again!