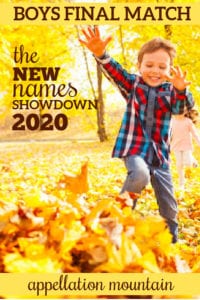 Time to predict the future!

Every year, Appellation Mountain readers weigh in on the best new boys names. They’re the names recently returned to or debuting in the US Top 1000.

And your track record? It’s AMAZING, especially when it comes to boy names.

So which name will join Wilder, Shepherd, Wells, and Archie?

Thanks to your votes, it’s down to just two finalists.

Blaise narrowly won over Mac, with 53% of the vote. Blaise is such an interesting name. Fiery word name Blaze has ranked in the US Top 1000 for the past nineteen years. But it’s falling slightly of late. Blaise feels like an in-between choice – traditional enough to feel enduring. (I mean, there’s the saint and the philosopher.) But it’s still downright cool. Mac, though, picks up on our love of mini names for boys, strong single-syllable favorites like Max and Gus and Jack. So no surprise that this contest was relatively close.

Callahan blew out the second race, taking almost 90% of the vote over Seven. I’m often wrong about how contests here will shake out, but this one? It felt inevitable. Seven is an edgy word name with a cool sound and an intriguing set of meanings. It could catch on … but it will take some time. Callahan, on the other hand, is a name that I’ve long thought was due for the spotlight. It’s an upbeat Irish surname name, with easy nickname Cal built-in.

That means that we have a tough choice in our final match-up!

Which name do you imagine will catch on in the coming years? Scholarly and cool Blaise? Or high-energy Callahan?

My guess is both.

But you can only vote for one!

Thank you! Voting stays open until the morning of Wednesday, October 21st. Check back on Thursday, October 22nd to learn which name joins the New Names Hall of Fame!