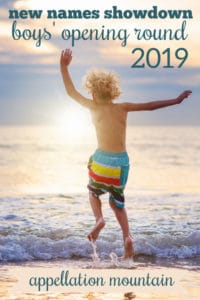 Time for the new names showdown 2019 boys opening round.

Our goal: to choose the name most likely to climb dramatically when the new numbers come out in May 2020. This is the boys’ contest; the girls’ opening round posted earlier today.

The competing names come from the new entries to the US Top 1000. I picked my favorites, and now they’re squaring off to find the one readers love most.

In order to compete, a name has to be either debuting on the list, or returning after an absence. Alternate spellings don’t count, even though some of them could easily catch on in a big way.

Over the next few weeks, we’ll narrow down our favorites, until we have the Appellation Mountain community’s top pick. And then, next May 2020, we’ll see how well our favorite name fares in the names data.

One of the takeaways? We’re pretty good at picking the Next Big Thing when it comes to boys’ names.

So let’s put our thinking caps on, and vote for the names most likely to fare well in the immediate future.

Cool and high-fashion Kenzo versus cuddly – but regal – Archie.

This first round is a killer! We’ll have to say good-bye to some favorites, but the outcomes tend to be pretty clear. Other contests might come down to just a few votes! Voting in the new names showdown 2019 boys opening round closes on Thursday, July 11th. The next round goes live on Saturday, July 13th. Please check back to see if your favorites advance!