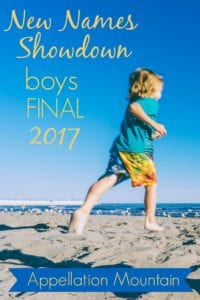 Welcome to the New Names Showdown 2017 boys final! Looking for something fun to do with your summer weekends? Vote for the newcomer baby name most likely to win over parents in the next decade.

Let me explain: 42 boys’ names joined the US Top 1000 this year, either returning to the list after an absence, or debuting for the first time. From that list, I picked eight promising contenders. Your votes narrowed down the field of eight to just four promising appellations, and now only two remain!

We have to wait until May 2018 to find out if our votes accurately identified a rising star or not, but I think you’ll do well. Last year’s winner of the boys’ New Names Showdown? The white hot Wilder won the whole thing.

Here’s how the semifinals played out:

That gives us our contestants. Ready, set, vote!

Here’s what makes this contest fascinating: both names carry a subtle spiritual meaning. So subtle that I wouldn’t assume that parents chose them for that reason. And yet, I suspect it draws many parents to the names.

Jericho comes from the Old Testament, but sounds bright and modern. In the Book of Joshua, the Israelites won a victory by bringing down the city’s walls. You may have heard the nineteenth century spiritual, “Joshua Fit the Battle of Jericho.” It’s been recorded by many a legendary singer, including Mahalia Jackson.

Then there’s Shepherd. It’s a surname name, and an occupational one. But if Hunter and Archer and Remington feel at least a little aggressive, Shepherd stands in contrast, a gentler name. Thanks to the image of Jesus as shepherd of his flock of faithful, it also carriers spiritual significance. Or not – after all, plenty of families have the surname on their family tree.

As with the girls’ final, I think these names could appeal to the exact same parents. But now it’s up to you: which name do you think will rise the highest in the next few years?

Thanks for voting, and please check back next Saturday to see which of your favorite names won the New Names Showdown 2017!