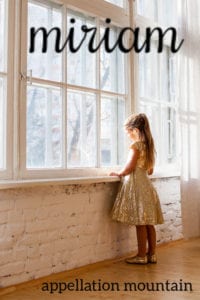 Thanks to Toni for suggesting our Baby Name of the Day.

When the pharaoh ordered the death of all newborn Hebrew boys, it was Miriam who carried baby Moses to the river. And when the pharaoh’s daughter discovered the child, she was the one who suggested adoption. To top it all off, Miriam also encouraged the princess to find a nurse for Moses – none other than Jochebed, their mother.

Religion aside, it’s easy to admire the boldness and cunning required to save her family.

Jewish parents long embraced the name. Post-Reformation, Christian families used this form, too. Though it’s worth noting that during the Middle Ages, at least in English, they would have been considered the same name.

Miriam gives us the classic Mary. Forms like Mariam and Mariamne appear in various ancient texts, too, and some remain in use. The meaning and origins are open to much debate:

Since 1880, Miriam has ranged between the upper 100s and the high 300s in the rankings – the kind of name never wildly popular, but never obscure, either.

Given those numbers, it’s no surprise that we spot the baby name Miriam over the decades.

Truman Capote penned the short story Miriam about a widow living a solitary life until she meets a girl with the same name. Spookiness follows.

A handful of actors, writers, singers, and notable figures have answered to the name, too. There’s twentieth century scientist Miriam Rothschild. It’s also the given name of Ma Ferguson, the first woman elected governor of Texas, way back in 1925 – after her husband was impeached!

There’s a minor character in Coraline by the name.

Still, the nickname offers one option that could appeal to parents.

A great nickname can help revive a classic choice. It makes more serious options feel wearable for a small child. And it offers options and flexibility, something that many parents like.

Miri isn’t the only possibility. Mimi works, too, and I’ve heard Mitzi suggested.

But it’s Midge holding the spotlight these days.

The reason I think the baby name Miriam could catch on in the 2020s?

But then her husband leaves her for his secretary. And she ends up on stage, riffing on her life gone wrong … and turning into a rising star along the way.

While on stage, she’s always Mrs. Maisel, she switches between her nickname – Midge – and given name everywhere else. Her parents call her Miriam; friends and colleagues tend to use Midge.

If the creator of The Marvelous Mrs. Maisel sounds familiar, that’s because Amy Sherman-Palladino also gave us another show about strong-willed, fast-talking, flawed but admirable women: Gilmore Girls.

Since Gilmore Girls launched Lorelai, it’s not a stretch to imagine that we’d embrace Mrs. Maisel names, too.

Sensible and strong, Miriam doesn’t feel as familiar as Mary. But it fits with classics like Eleanor, Margaret, and Evelyn.

Just over 1,000 girls received the name in 2018, which makes it relatively uncommon. But the series debuted in March 2017, with the second season coming late in 2018 – and the third at year’s end 2019. So it’s a little too soon to know if the show will have an impact.

Whether you’re a fan of the series or not, Miriam feels capable and strong. I’d call it a quiet classic – not as instantly familiar as Mary, but not as well-used through the centuries, either.

It’s a solid stands-out/fits-in choice if you like your names with history to spare.

Would you use a nickname for Miriam? Which one? 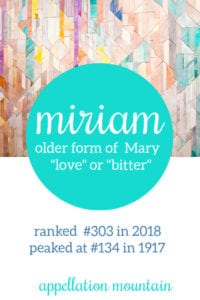 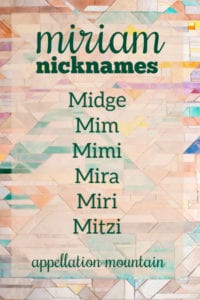