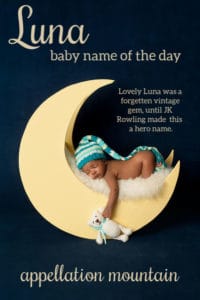 Luna qualifies as the Harry Potter character name most thoroughly embraced by Muggles.

Thanks to Unknown for suggesting our Baby Name of the Day.

Long before JK Rowling imagined Hogwarts, her heroic boy wizard, or any of his fantastic world, the Romans worshiped Luna as a goddess of the moon.

Sometimes Diana and Juno were called by the epithet Luna; at other times it’s clear that she was a separate deity.

The name shares roots with the Latin word for light, making it a cousin to lux and lumen. And our words lunar and lunacy come from the same origins. As goddess names go, it’s one of the most easily understood. That’s especially true, as Luna is simply the Spanish word for moon.

All of this puts Luna perfectly in step with current nature name trends for girls.

None of this means that the name is novel.

In fact, it qualifies as a vintage revival. Back in the nineteenth and early twentieth centuries, Luna regularly ranked in the US Top 1000, charting as late as 1921.

Another vintage reference: Luna Park, a destination at New York’s Coney Island opened in 1903. Entrepreneurs Elmer Dundy and Frederic Thompson opened the park; the name could have come from Dundy’s sister, or possibly it was inspired by one of their flagship rides, A Trip to the Moon. Dozens of other parks borrowed the name, from Melborune to Moscow, and across the US, too.

While there’s history aplenty before the Harry Potter books, the name had fallen out of use – dramatically – before they were published.

Miss Lovegood first appears in the fifth book in the series, published in 2003. At first, she more than earns her nickname – Looney – thanks to a love of conspiracy theories and unconventional accessories. But she ends up quite heroic by the series’ end.

The name re-entered the US Top 1000 the same year The Order of the Phoenix was published. When the movie adaptation followed in 2007, Luna reached the Top 500.

Parents clearly took inspiration from the character, and yet, it was also case of the right name at the right moment.

And, of course, Stella – the Latin word for star – was white hot in 2003, and paved the way for sister name Luna to catch on.

For a few years, it seemed like every famous family was choosing this name for their daughters.

Uma Thurman named her daughter with Arpad Busson Rosalind Arusha Arkadina Altalune Florence in 2012, but they shortened her mouthful of a moniker to just Luna.

Penelope Cruz and Javier Bardem gave the name to their daughter in 2013, reinforcing the name’s status as an easy English-Spanish crossover.

Since the name debuted in 2003, it’s gained steadily, reaching #37 on the current charts. And Luna shows no signs of slowing down. A few years ago, I wrote, ” … no wonder this celestial appellation is a stylish choice for parents in 2014. The only question is how popular she’ll become.”

All these years later, the answer seems to be very popular, indeed. And yet, I still think this night sky name could rise even more. That means the question remains: just how high will Luna go? 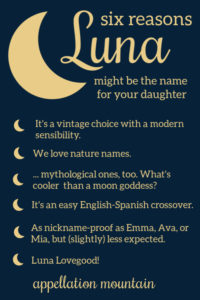