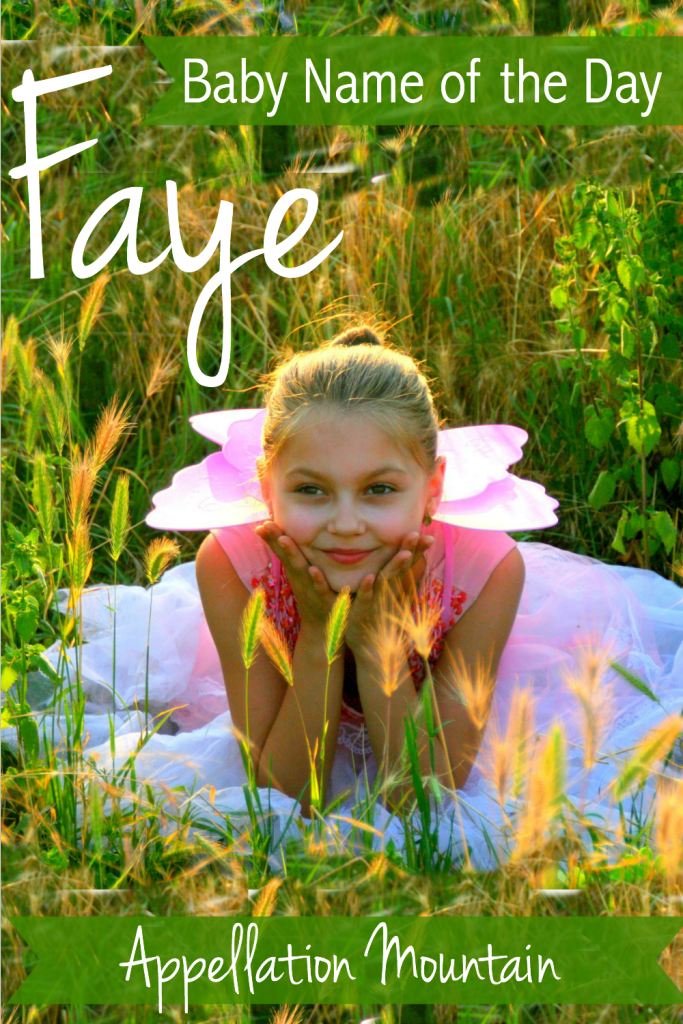 Faye is a fairy and an enchantress. The world’s biggest ape fell for Faye. Could this mini name make a great choice for a daughter?

Thanks to Another and Aela for suggesting our Baby Name of the Day.

Which is the most common spelling?

There’s more than one possible origin for the name.

In Middle English, a fairy was a faie. In Old French, it was fae. And in Latin, fata – as in the Fates – a trio of goddesses responsible for determining each man’s destiny. Faeries are found throughout European folklore, though faerie was initially used as a synonym for enchanted. Sometimes they’re tiny; sometimes they’re human-sized. The Victorians added the wings. The explanations for their origins are rich and varied. It’s possible that the given name was borrowed from the legends.

In Anglo-Norman French, fei meant faith, from the Latin fides. It became fai or fay in English. Even Shakespeare used fay to mean faith. That makes Faye a cousin to Faith.

Speaking of Faith, the third century Saint Faith of Gaul is also called Fides, Foy, and yup, Fay. In Spanish, she’s Santa Fe. It’s said she was martyred, perhaps under Diocletian. Conques, France was the center of her veneration – and Conques is located on an important pilgrimage route, the Way of St. James. As pilgrims stopped at the church, the saint’s fame spread.

It’s also possible to find various spellings in use as a surname, with multiple possible origins, including Irish and French. This likely explains why the name is sometimes used for boys.

Fay Wray – born Vina Fay Wray – made her first movie in 1923, at the age of sixteen. But she became a star in 1933, in King Kong. Wray played Ann Darrow, and – well, there’s a jungle and an ill-advised decision to bring the massive ape back to New York, and then the bit with the Empire State Building. It’s the stuff of Hollywood screen legend.

In 1996, Liv Tyler played a fictional Faye in That Thing You Do!, a vaguely Beatles-esque tale of music stardom and true love.

There have also been characters on television, including Cowboy Bebop.

The name’s 2014 re-entry into the US Top 1000 is noteworthy. It could be a successor to other straightforward names for girls, like Grace and Claire. Rhyming names like Rae and Mae are popular in the middle spot, and Faye’s vintage vibe could appeal to parents considering names like Ada and Ivy.

If you’re looking for a minimalist name for a daughter, but one with plenty of backstory, Faye might satisfy.

Which spelling do you prefer? Can you see this name catching on?