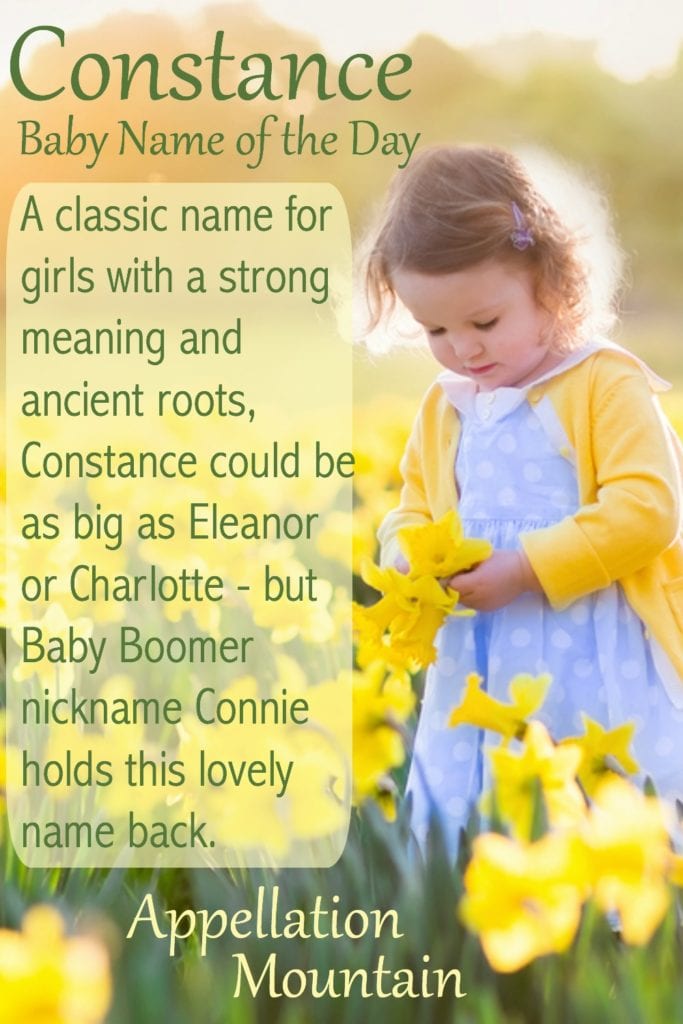 In Latin constantem means constant or steadfast. Names have been based on this word for millennia – think of Constantine.

In Late Latin, Constantia appeared as the usual feminine form. It wasn’t until Medieval England that the -stance ending became common for girls.

Credit to William the Conqueror, whose daughter answered to the name.

Besides the Anglo-Norman princess, plenty of other notable women have worn the name, including:

Lake Constance sits at the foot of the Alps, and touches Germany, Switzerland and Austria. The lake takes its name from neighboring city Konstanz, and Konstanz comes from Roman emperor Constantius I.

During the late nineteenth century, the name would have felt familiar in the US. It ranked in the 300s most years.

Then it started to climb. Some credit goes to Constance Bennett, a 1930s Hollywood favorite, best remembered for starring opposite Cary Grant in 1937’s Topper.

And therein lies the problem: we’re not naming our daughters Barbara, Linda, or Carol. Constance feels stuck in style limbo with other Baby Boomer favorites.

Perhaps concerned that the name would lead to dated nickname Connie, parents have skipped over this name for years.

In fact, Connie ranked far higher than the formal version, reaching Number 35 in 1955.

Singer Connie Francis – born Concetta – found great success in the late 1950s. But that’s probably another reason the name feels dated, not a reason Connie caught on in the first place.

Still, it comes a surprise that this name is so far off the charts in recent years.

Constance has yet to chart in the US Top 1000 during the twenty-first century. A mere 142 girls were given the name in 2015.

Actor Constance Marie, who rose to fame as Angie in The George Lopez Show, helps keep the name familiar.

There’s another reference Disney fans will recognize. The Haunted Mansion rides at both Disney Land and Disney World include a black widow bride by the name.

If you watched Gossip Girl, you might think of the fictional prep school attended by Blair, Serena, and friends: Constance Billard School for Girls. It’s referred to simply the founder’s first name.

Altogether, that’s not nearly enough to bolster the name.

And yet, parents seeking a strong name for a daughter might add this to their lists. It’s far less common than Eleanor, but with every bit as much backbone.

Caroline and Amelia don’t require nicknames, so surely at two-syllables, Constance will not need one, either.

But if you like the idea of a short form, may I suggest Tancy? While I’ve never heard this combination used in real life, Tancy flows naturally from the second syllable. Tansy is an herb often considered a weed, so perhaps that’s not the best association – but I do think it’s wearable.

What do you think of Constance? Would you consider this name for a daughter?