Baby Name Help is a series at Appellation Mountain. Every Saturday, one reader’s name questions will be discussed.

Their girls’ list has been narrowed down to Djuna, Alberta, Bernadette, and Mabel/Maybell, but they’re struggling to find ideas if baby #3 is a boy.

We feel a bit like we’ve painted ourselves into a corner with the two names we’ve already used, and all the leftovers on our lists seem to go well enough with one of the kids’ names, but not both. I’m not overly concerned with matching, but I’m talking major outliers.

Of the new boy names we’ve considered, my partner likes NONE of them well enough to use. I have ultimate deciding power, but it’d be nice to find a name we both love.

Names that S likes, but her partner does not like:

S describes her both-mostly-like list as “sad, short, and meh,” so they’re not really finalists – at least it doesn’t sound that way.

My last name is long, French, and starts with an L, so most L-ending names are out. The middle will probably be a two syllable S name (like S!nger) followed by Tom.

S describes names that they love:

And finally: I hate to ask for help because our other kids’ names are full of meaning to us, but we need help!

Read on for my answer – and please be sure to leave your thoughts in the comments!

So here’s the funny thing – as I was reading, a bunch of names popped into my head.  Henry, Milo, Laszlo, Louis!  All vintage boy names, mostly with a quirky-cool vibe.  All of which are on your ruled-out-for-various-reasons list.  And Otto, which made your maybe list.

The more I think about, I think it is tough match Ge0rge and Zeld@.  Ge0rge is a solid citizen, while Zeld@ is all jazz age excitement.  Nothing mismatched about them – but a name like Henry feels so perfectly paired with Ge0rge that Zeld@ becomes the outlier.  And if you went with something like Arlo, I can imagine that Ge0rge might strike others as a family name used out of obligation.

When I tried running the names through Nameberry’s Namehunter, the results were either awfully conservative (Edward) or terribly daring (Maceo).  Neither direction feels quite right.

So this is a puzzle.

Here’s my suggestion: let’s take a walk back in time.  You’ve got a definite preference for older names.  Both George and Zelda were at their most popular in the early part of the twentieth century, so let’s look at 1900 – 1930 and see if some of those vintage boy names stand out: 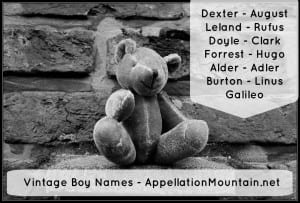 And that brings me to my final point: many of these names feel like outliers now, but when you actually have the three children together in your home, I suspect they’ll feel like a perfect match as time goes by.  None of your choices are forever-jarring, like sisters called Madison and Esther.  The mismatch is slight, subtle enough that it’s only noticeable when trying to add another sibling to the mix.  So I’d encourage you to use the name that you love, even if it isn’t necessarily a perfect style-sibling to Zeld@ and Ge0rge.

What suggestions do you have for S?  Are there names that jump out of this list as great matches?  Something I haven’t listed?  Please add your thoughts below!