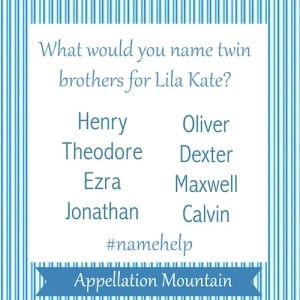 We are stumped for names for our twin boys due in June and would love some help.

We love vintage names that are not too uncommon that people will think strange. We live in the midwest, so super hipster names don’t quite fit here.

For our daughter we chose Lila Kate. My husband and I are Luke and Elizabeth. The kicker is our last name. It’s very unique, bold and attention-grabbing …. B@tm@n! Yes, we have a superhero last name.

With our last name, we have to think about things a little more. Obviously no Bruce, Wayne, or Alfred!

We would like to honor grandparents as middle names with John being one for sure and either Ernest or Roy for the other.

I’m finding it difficult to latch onto boy names the way I do with girl names. I have a long list of girl names I love and no boy names. Here are some on our list to give you an idea of our style – but I’m honestly not in love with any:

Can you and your readers help us come up with some great twin boy names that will fit well with Lila Kate AND a last name like B@tm@n?

Congratulations on your twins – how exciting!

I have friends with the last name Hunter, and while it’s not as surprising a surname as B@tm@n, they did find that a great many names created phrases. What Rose Hunter likely to become a botanist? Is Will B@tm@n a question?

If you’re dealing with this kind of surname, I think there are two rules of thumb:

Of course, it sounds like you’re looking for a name that stands out just a little bit: vintage, but not so vintage that you must immediately relocate to Park Slope and adopt a wardrobe of skinny jeans and ironic tees.

Happily there are plenty of familiar boys’ names that hit that sweet spot:

Henry – My first thought was Henry. Like Lila, Henry is a name that feels very current in 2016. The only problem is that it’s more popular than you might like. Henry is in the current US Top 40, and continues to catch on. Still, Henry B@tm@n sounds exactly right, and I love Henry as a brother for Lila.

Theo, Theodore – Another traditional name with a long history of use. Theodore is outside of the current US Top 100. Just Theo is even less common, but, of course most Theodores are Theo nowadays. Theo B@tm@n – I barely even notice that the surname graces the cover of comic books!

Ezra – The line between hipster names and vintage names can be thin, and tough to draw. Ezra is literary and hasn’t been super-common in recent generations, so that’s a strike against the name. But it’s not so different from #1 Noah, and that zippy ‘z’ ending is helping more parents discover the name. Ezra B@tm@n; Lila and Ezra. I like those two together.

Jonathan – Here’s a thought: what if you took family name John, and expanded it to Jonathan? It sounds great with Roy or Ernest as middle names, or you could choose something completely different. Jonathan is the epitome of a normal name – we’ve all heard it before – and yet it’s not overwhelmingly common. (It reached the US Top 20 in the 1980s, and has been in the Top 100 since the 1960s, yet I don’t think of it as tied to any particular decade.) I also think a longer name works well with your two-syllable surname. It’s nickname-rich: Jack, Jono, Jonty, Nat, Nate, and Jon all come to mind. But I like it best in full. It reminds me quite a bit of Julian, probably my favorite from your original list.

Oliver – I hesitate to include Oliver, because it’s a popular name that has caught on quickly in recent years. And yet, it has the same ‘v’ sound you like in Everett and Levi. It’s exactly the right style, too – traditional and vintage, but not so out there that it’s considered hipster. I love it as a brother name for Lila, it pairs well with nearly every name on this list, and it sounds perfect with your surname – Oliver B@tm@n.

Dexter – I hesitate to include Dexter, because I do think it still reads slightly hipster. And yet. Lila and Dexter. Dex B@tm@n. Dexter B@tm@n. It’s a quirky-cool name that stands up to a surprising surname.

Maxwell, Max – The ‘x’ in Dexter got me thinking about Maxwell and Max. There are a lot of little boys with Max names these days. And yet, I do think it’s a traditional name that feels vintage and remains outside of the most popular names in the US, so it belongs on this list.

Calvin – Nearly every two-syllable, ends-in-n name that I’ve considered sounds a little off, and yet Calvin works, I think. It has the great letter ‘v’ you’re drawn to, plus it’s vintage but not too out-there.

Now, let’s take a look at some possible combinations:

My favorite is Henry and Oliver – Henry Ernest and Oliver Roy, I think.

Readers, what would you suggest to Elizabeth for her new sons?