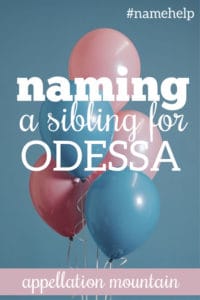 Last year I wrote you looking for name help finding a formal girl name for the nickname Doe. After your suggestion of Odette, it made me look at names starting with “Od”, and I came across the name Odessa and fell in love with it and named our daughter that.

Well now I’m expecting baby #2 and have some names picked out for a boy and girl but nothings hitting me like Odessa did. The boys names feel too plain and the girls are what was left over from our daughters lists and nothing feels like it goes with Odessa.

I love how Odessa is vintage, and it feels familiar due to Odessa, Ukraine and Odessa, Texas, among others places that share the name. And I like that it’s not too out-there because it feels like Vanessa or Tessa or popular “O” names.

I’m looking for a name that has the same feel, but I’m also interested in fall names too since baby is due in October. But all the lists I’ve seen are obvious fall-related names or names inspired by horror films.

Any suggestions would be greatly appreciated!

I think I know exactly what you mean about Odessa. It’s a vintage name, but there’s something bold and daring about it. And while it feels familiar, there’s no question that it’s quite rare.

But maybe part of the challenge is this: you’ve warmed to Odessa as a name. Sure, it struck a chord as soon as you heard it. Over a year, it’s gone from name-that-might-possibly-work to The Name for our child. When we’re searching for latter feeling, it’s easy to forget that it’s rarely a lightning bolt moment. It’s one of several reasons that naming a second (or third or fourth) child can be harder.

That caution aside, let’s see what goes with Odessa.

A Brother for Odessa

Cassian – I almost suggested Caspian, except that implies you’re naming all of your children after large bodies of water. Besides, Cassian seems a little more vintage. It’s an ancient name, one made modern by Diego Luna’s character in the Star Wars series. And while the name rose dramatically in use following 2016’s Rogue One, it remains well outside of the current US Top 1000.

Leopold – Leo appears in the current US Top 100. But Leopold? Nope. Just 114 Leopolds were born last year, which puts it well outside of the current Top 1000. It’s a good compromise between the familiar and the out-there. Plus, I like the long ‘o’ sounds linking the two names.

Ransom – It rhymes with handsome, and while it might bring to mind cut-up letters glued into a threatening note, Ransom has another meaning: redemption. It’s often used in a Christian context, but it comes from the Latin redemptio via French. That makes it a powerful, uplifting choice.

Rufus – If everything old is new again, Rufus’ time is near. It’s faded to near-obscurity since the 1920s, but sounds just right with Lucas.

Thoreau – Odessa brings to mind the natural world. And while it’s rare as a given name, we recognize it from the map. Thoreau feels the same – tied to the great outdoors. It’s seldom heard as a first name, but the author’s fame makes it immediately recognizable.

A Sister for Odessa

Cosima – Vintage and rare, Cosima sounds like a sister for Odessa.

Sonnet – I wonder if trying to find another vintage name is actually part of the problem? Lots of more modern choices feel compatible with older names. Sonnet tops my list of names considered modern and unusual, but still nicely at home with names like Odessa.

Thisbe – I wonder if you’d like Thisbe, called Bee? It seems to echo the pattern of Odessa/Doe that you established with your daughter. Plus, with names like Chloe and Penelope so stylish, Thisbe fits in, while still standing out.

Zelda – The most popular name I’ve suggested so far, Zelda sounds zippy and bold. It’s a jazz age name (think Zelda Fitzgerald) and a modern one, too, thanks to the letter Z and the video game series that started way back in 1986.

Overall, my favorites are Cassian and Thisbe. I’m not sure what draws me to Cassian over the other names, but Thisbe’s possible nickname Bee feels like a great pair with your older daughter’s name – without feeling too closely matched.

Readers, what would you suggest as a sibling name for Odessa?

Image by rawpixel from Pixabay