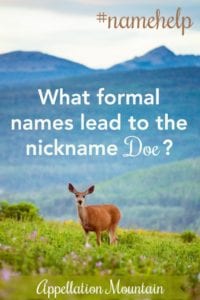 Hello, I need some ideas for a girls name that could have the nickname Doe.

I’m currently expecting my first child. We don’t know the gender yet (couple weeks!!), but I have no problem finding boy names.

My problem is girl names, more specifically I fell in love with the name Doe. It was a character in a book I love, but I just don’t know if dear hubby (or society for that matter) could go with Doe as the first name.

So I’m trying to find alternative names where I could use Doe as the nickname. Any help would be greatly appreciated.

Congratulations on your first baby!

We happen to have a family friend called Doe. To be clear, I don’t think she’s called Doe anywhere else than with our extended family. (What can I say? We’re serious nicknamers.) But I can say that it wears very well, and that it feels very much like a name.

But even in our age of Fox and Wren, Doe would be very daring as a given name.

That’s almost certainly due to Dorothy Virginia Margaret Juba, a successful model from the era. She was known professional as Dovima, from the first two letters of her three names. (How famous? Seriously famous. Richard Avedon photographed her in an Yves St. Laurent gown with elephants.) The nickname for her stage name? Doe.

Interestingly, Richard Avedon’s first wife was also called Doe. She was born Dorcas – a non-starter of a name in 2017, and maybe less than stylish then, too. She also became a model and actress, and may deserve credit for some of those 1950s-era Does.

All of this makes the nickname even more intriguing, but still suggests a formal option is required.

Our family friend is Doreen, but that name feels a little too 1950s for a 21st century baby.

Here are some that would work:

Dorothy – Dorothy shortens to all sorts of marvelous nicknames – Dolly and Dory and Dot! But Doe works, too. In fact, it’s a great modern, unexpected choice for a traditional, vintage girl’s name. And if Dorothy works, Dorothea could be an option, too.

Dominique, Domenica, Domino – Any of the feminine forms of Dominic feel like great ways to get to Doe. I love Domino, but it’s pretty bold. I think Domenica might be the safer choice.

Doria – Doria might be an elaboration of Dora, or it could be a feminine form of Dorian. Either way, it’s a pretty choice that fits in with so many ia-ending girl names today.

Dorinda – I can’t decide if Dorinda feels dated or fresh. I do think Lucinda is much neglected, so why not Dorinda? It caught my eye because of an actress named Dorinda Katz, sometimes known as Doe.

Dosia – Here’s one that might work. In Polish, Dosia can be short for names like Theodosia or Dorothea. It’s pronounced with a long ‘o’ and a ‘sh’ sound – doe sha.

Doveva – I’m fascinated by Doveva. It looks like an invented name based on Dove, but it actually comes from a Hebrew name meaning graceful.

Elodie – Or maybe the Doe sound doesn’t need to be in the beginning? Elodie has a strong ‘o’ and ‘d’ sound – just in reverse order. Still, I think it works.

Odette – Along the same lines, names like Odette and Odile reverse the ‘o’ and the ‘d’.

Overall, much as I’m drawn to choices like Elodie and Odette – and I’m personally comfortable with a stretch nickname! – my favorite is Dorothy.

Dorothy shares the same storybook quality as popular names like Alice and Penelope. Three-syllable, ends-in-y girl names have history galore. It’s classic, and it peaked in the 1920s. Since it usually takes about 100 years for a name to cycle in and out of fashion, that means Dorothy is prime for revival, and the numbers reflect it. It has climbed steadily in use over the last five years, currently sitting at #652. Plus, Doe feels like an obvious nickname option.

So Dorothy gets my enthusiastic vote! But I know readers will have more to offer, so let’s turn it over to the community.

What would you suggest as a formal name for Doe? I know I’ve overlooked some possibilities! Do you think Dorothy is ready for revival?