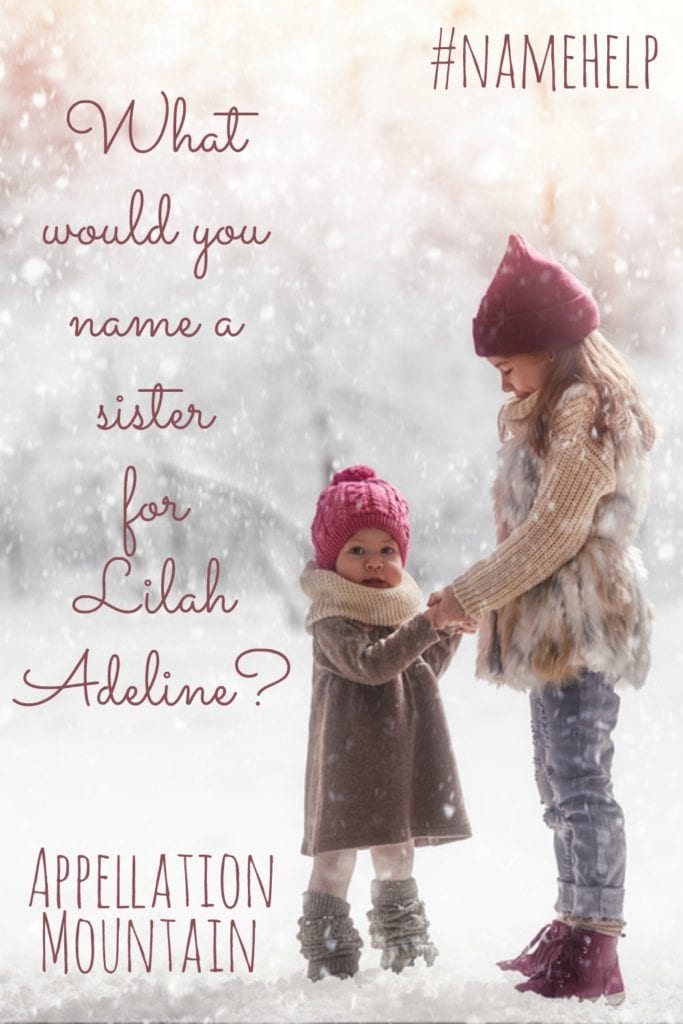 We are currently pregnant and due in February with our second girl and STRUGGLING to settle on a name we can both be excited about. I’ve been reading your blog since before my first pregnancy and I’m hoping you and other readers have some helpful suggestions!

Our first daughter is named Lilah Adeline and we love it.

Agreeing on her second name was easy: Adeline was my husband’s grandmother’s name and I liked the feminine and vintage sound so it was an easy pick.

Her first name was a little tougher. We narrowed it down to two names pretty quickly but just couldn’t decide until a couple hours before we left the hospital post-delivery. While we both love the name Lilah, I wish the spelling was Lila and feel like I was so tired and out of it after the birth that I didn’t put up much of a fight with the spelling and now I occasionally feel pangs of regret that I didn’t lobby harder for the spelling I preferred.

Picking out a second girl name is proving difficult and I want to head into this next birth with a name already chosen so we’re not trying to pick something out in the haze of exhaustion. However, we can’t seem to agree on any names and nothing seems to strike the same tone and style as our first daughter’s name which we’d like to do.

Middle names I like are Hazel and Lane although I’m not wed to them.

So far my husband has said no to all of my picks and thinks a lot of them are “old lady names”. Somehow Adeline doesn’t ring as “old lady” for him like these names do (despite the fact that he actually knew an old lady – his grandmother! – with that name) … I’m baffled.

My husband loves the first name Lucy and has even blurted it out a few times when people ask whether we’ve picked a name even though we agreed to keep the name private until after the birth. I like the name Eloise as a way to get to nn Lucy – so we don’t repeat the first letter L – but he doesn’t seem too keen on that idea. He is more or less indifferent about the middle name and has said that if I go with Lucy I can pick whatever middle name I want, but that’s not going to fly.

Our last name is a traditional boy name that is two syllables and starts with an H.

I’m desperate for some name ideas that we might both agree on so thanks in advance for your help!

Please read on for my reply, and leave your helpful suggestions in the comments.

It sounds like your husband has a definite favorite, and he’s not willing to consider other names. My rule of thumb is this: when one partner dislikes a name, it’s off the list. At least in the short term. Because it’s always possible that 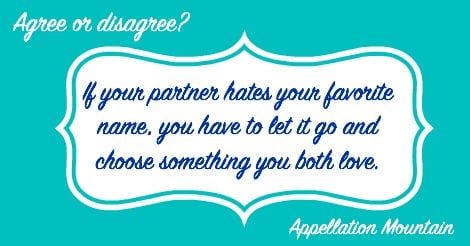 things will change. But when we dig in our heels and say, “Nope! It’s settled. She’ll be Ermengarde Hippolyta.” Well … that makes discussion difficult.

You’re disinclined to choose another L name, which makes sense. While no one can tell you that two siblings with the same first initial makes a pattern, you know yourself best. If Lilah and Liv or Lilah and Lucy create a pattern in your mind, and you’re imagining a future family photo with Lilah, Lucy, Leo, and Larissa, well … then I think all L names should be off the table. Temporarily.

That leaves us with 25 other letters of the alphabet, and a general preference for girl names with some history, but a current feel.

Jane – Jane shares the same storybook quality as Lucy, is as brief as Liv, and reminds me of your middle name possibility, Lane. I wonder if Jane Lucy, Jane Lucille, or Jane Lucia would be a possibility?

Ruby – Ruby is close to Lucy in terms of sounds, but avoids the repeating initial. Another bonus? Red is associated with February, so it seems like a fitting  name for a baby born during the month of Valentine’s Day.

Olive – My best guess is that Olive will strike your husband as an other granny name. But if he’s rejected the more modern Liv, perhaps it’s worth a try.

Marlo – Margot always makes me think of Marlo. Marlowe – the surname spelling – has attracted some attention lately, but it’s still not in the Top 1000. Retro Marlo also remains rare, but feels more like a sister for Lilah.

Stella – The good news: Stella is pretty much never spelled Stellah! It’s a popular name, and a vintage one, too, but I think it’s worth consideration. Stella Lane is a swoon-worthy combination.

Maisie – Like Margot, Maisie is derived from Margaret. But sounds-wise, Maisie seems a little bit closer to Lucy.

Sadie – Another suggestion along the lines of Maisie, but Sadie has caught on in recent years. That might be enough to make your husband see it as an appropriate name for a child born in 2017, rather than a granny!

Wren – I suspect your husband is using “old lady” to describes names he personally dislikes, rather than a specific group of names most popular in the earlier decades of the twentieth century. (I’ve heard plenty of people do the same, only to describe the “old lady” names they love!) But if he’s really after something fresh, I wonder if Wren might appeal? It’s nowhere near Lucy in terms of sound, but it does bring to mind Lane. It’s very much a name that wouldn’t have been heard before this century.

Overall, I think Ruby tops my list. It addresses your concerns about repeating initials. It picks up on many of the sounds your husband loves. And the color creates a sweet tie-in to the season.

But there are lots of fantastic options, and I know we’ll get some more great suggestions in the comments. So, readers, over to you!

What would you name a sister for Lilah Adeline?