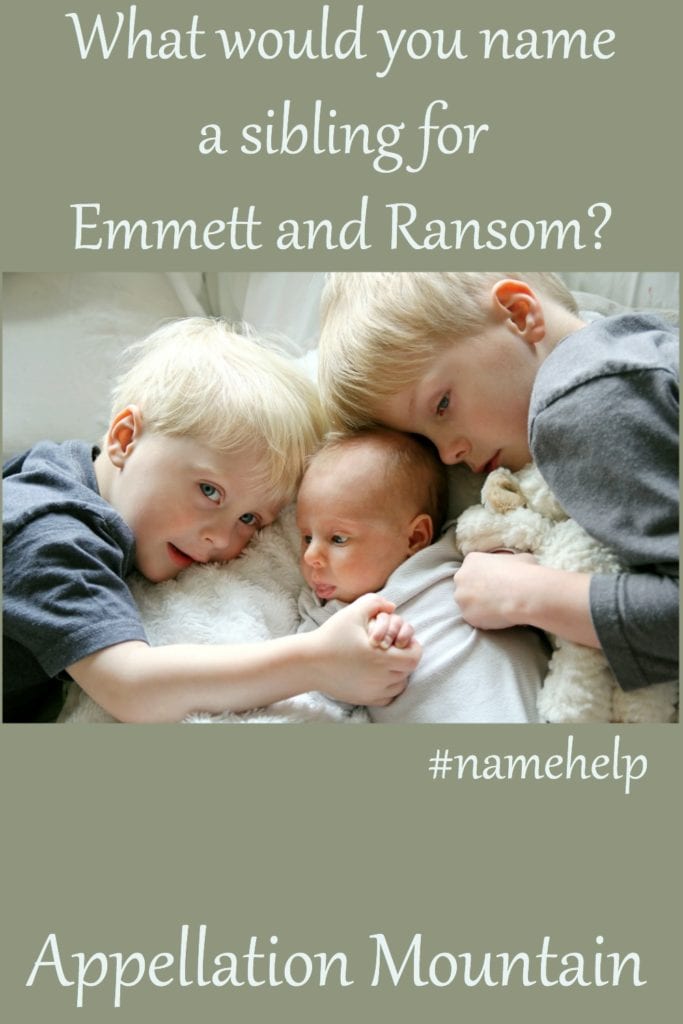 Update: He’s here! Scroll to the bottom for an update on the name Kristine and her family chose for their new son.

We can’t do it. We can’t even come up with a top three list for child number three!

The gender will be unknown until birth just as our previous two.

Our sons, Emmett and Ransom, were so easy to name! Going into the labor and delivery room we had a list of three boy names and three girl names to choose from and knew from the moment we laid eyes on each what their name should be.

Looking back at our reserve names they have become unattractive or do not fit in as a sibling set.

I would prefer all of the names to be from the same era but am willing to break from that idea if you find a name that goes so well with the others.

We are attracted to Alice, Effie, Clara, Harrison, Sullivan, and Whitman but are not in love with any of them.

Alice, Clara and Harrison are a little too popular for my taste.

Our last name is very common, just one syllable, and starts with an S.

We can’t wait to see what you can come up with.

Congratulations on baby #3! I have a friend who is expecting her third, and she feels the exact same way – there aren’t any names left.

She knows that’s crazy talk. Obviously, there are so many names still unused. But I do think there’s something that happens after you’ve named a child or two. More names are ruled out. There’s more of a pattern to fit in. So even though there are names galore, it really can feel like there aren’t any names left that will work for your family.

It sounds like you prefer names that are two or three syllables, that feel vintage, and aren’t in the current US Top 100 – or maybe even in the Top 1000. It also seems like you lean towards nickname-proof names.

That’s a pretty good jumping off point – so let’s see if we can’t find some possibilities that work.

Ida – Ida is as short as Ava and Mia, less expected than Ada or Mila. It’s not in the current Top 1000, but it will generally be familiar to most as a given name. There are a bunch of positive associations, too: a Tennyson poem that inspired Gilbert and Sullivan’s Princess Ida; pioneering journalist Ida Tarbell; one of the first women to direct films in Hollywood, Ida Lupino; and Crete’s Mount Ida, said to be the birthplace of Zeus.

Winnie – You have Effie on your girls’ list and Whitman down for boys. Would Winnie appeal? Again, it’s not in the current US Top 1000, though Winter is growing in popularity for girls, and Jimmy Fallon’s daughter is Winnie, also raising the name’s profile. Many parents will think of The Wonder Years, but that’s a positive association. And Winnie will fit right in with Molly, Ellie, Sadie, and lots of other nickname names in heavy use today.

Maude – Your last name is short, so maybe that rules out using a one-syllable name. But I’m always surprised at how often a short-short combination works. (Gabrielle Blair, of Design Mom, has a daughter named Maude Blair.) A medieval form of Matilda, there’s another tie to a Tennyson poem, plus director Judd Apatow and actress Leslie Mann are parents to teenaged daughters Iris and Maude. If you’ve seen This is 40, you’ve seen Maude on the big screen, as she’s now an actress in her own right.

Louise – Literary, romantic Louisa just re-entered the US Top 1000 in recent years. Tailored Louise remains just outside the rankings. It’s an unusual choice with considerable vintage appeal. I tend to think of Louise as nickname-rich – Lou! Lulu! Lucy! – but I can easily imagine Louise never being shortened. Louise Brooks lends some 1920s-era glam to the name.

Now, let’s take a look at names for a third son.

Latham – It’s another surname name, like Emmett, but with a different sound than either of your sons’ names. I’ve also seen Lathan, probably a spin on Latham influenced by Nathan. Latham feels vintage and decidedly different, without being too unusual. I think it’s a great addition to brothers Emmett and Ransom, and it’s definitely very rare in the US.

Calder – I keep trying to hone in on an ends-in-r name for your son, since that’s the one obvious ending sound you lack. And yet, an awful lot of ends-in-r names are popular (Asher, Carter, Parker) or feel more modern and energetic (Archer, Decker) than vintage. I think Calder might be one of the unusual possibilities – again, it’s not the current Top 1000 – that hits the right note. I would have suggested Jasper, but I wonder if that’s too popular for you to consider? It was in the low 200s in the US in 2015.

Dexter – Another ends-in-r name that feels like a possibility. Dexter has a sort of jazzy, edgy vibe that’s a little more high energy that the quietly antique Emmett and Ransom. But I think it could work.

Milo – Milo ranks in the current US Top 300, which means it is probably comparable to Emmett’s popularity when you chose the name. If Emmett feels too popular now, you’d probably want to avoid Milo, too. But if not, I think Milo might hit the right note. It’s less expected than Theodore, more traditional than Arrow.

Overall, I can’t get past Latham for a son. I think it goes so nicely with Ransom and Emmett! For girls, it seems like there are plenty of options. Winnie was the first one that came to mind, and I keep going back to it as I look at the list – but I do think it’s easier to add options to the girls’ list.