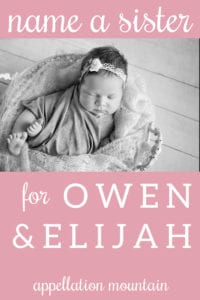 We have two sons, Owen Edward and Elijah Brent. We’re expecting a third baby in June. It’s a girl!

Owen was my husband’s pick and Elijah was mine. The middle names are for their grandfathers. Our girl name was always Amelia, probably the only name we ever both likely equally.

But I feel like we hear Amelia everywhere. My husband doesn’t think it’s a big deal, but he’s not the one who spends as much time on kid stuff (though that has changed this past year!) and so doesn’t notice.

Other names we liked, like Eliza, just seem too similar to our boys’ names, or are even more popular, like Isabelle. I like Aurora, but my husband just can’t get on board. We do NOT like nicknames.

Our last name sounds like Carrie, but with a K, so names like Lucy and Audrey don’t sound great.

We’re not set on a vowel name necessarily, but they tend to be our favorites. We also considered Isaiah for Elijah and Owen was almost Aiden.

Can you help us with a new list of names? Or maybe talk me into using Amelia?

PS – If it’s not too much, we’re stuck on middle names, too. This is probably our last child, and we have two grandmas to honor. It worked so neatly with our boys’ names that we’re feeling stuck. Our moms are Cheryl and Dawn, which don’t really combine, either.

Amelia is a very popular name for a daughter. And, thanks names like Emilia, Emily, and Amelie, it seems even more popular than a #7 rank would imply.

It happens, right? We talk about names with our firstborn, and five, six, seven years later, the world has caught up! But it’s also true that suddenly we know what kids are called. Unless we’re teachers or pediatricians, it’s easy to miss emerging trends … until we’re the ones on the playground.

And yet, I still think you should seriously consider naming this baby Amelia.

After all, Elijah is currently the #5 name for boys in the US. I’m guessing you know – or know of – other boys with the same name. But it doesn’t seem like it’s dulled your appreciation. Even Owen currently ranks #21. So if you haven’t been overly frustrated with moments when your boys share names, I suspect it wouldn’t really bother you for your daughter, either.

Then again, maybe this isn’t a vague feeling of hearing the name often. Maybe this is more of a “other families in our extended circle have used the name so it feels taken” scenario.

If that’s the case, then I understand the urge to move on. Let’s find some fresh ideas!

A SISTER FOR OWEN AND ELIJAH

A sweetly vintage mini name with a lot of strength, Ada is instantly familiar, but at #209, not nearly as common.

Storybook Alice is a classic name with plenty of strength. It’s hovered in the Top 100 for the last several years, ranking #73 on the most recent list.

I wanted to suggest Isla, but it does repeat lots of sounds in Elijah, doesn’t it? So I moved on to Iris instead. A vintage name that feels quite current thanks to our love of nature names, Iris ranks #129.

Like Alice, Lydia has steadily been a Top 100 name without feeling too common. At #94, it’s a great stands-out/fits-in choice.

As brief as Ada, Mila makes a short name with a lot of sound. At #19, it’s popular – but not Top Ten popular.

Like so many -ella names, Stella has had a good run. It comes in at #39 today. And yet, it still feels distinctive and sparky.

This name is also spelled Zoe, though Zoey-with-a-y is slightly more common. Of course, that could be another Amelia/Emilia situation, but I wonder if Zoey appeals t you enough to overlook it? I’m probably drawn to it because it shares Owen’s O and Elijah’s E … but whether anyone else would ever notice, well … guessing probably not. Zoey ranks #31 and Zoe #38.

My favorite for your family is probably Stella.

But let’s back up and talk about middles for a minute.

Aurora Cheryl, Aurora Cher, Aurora Charlotte … there are lots of ways to use the other grandmother’s name as a middle with Aurora and honor both women gracefully.

But if Aurora is truly not an option, I wonder if you’d use two middle names? Stella Cheryl Dawn? It does leave you in a jam if you did welcome a fourth child, and it was a girl and suddenly there are no family middles left. But it sounds like it’s much more possible that you’d exclude one grandmother or the other.

Readers, what would you suggest for Owen and Elijah’s new sister?