Emily and her husband are expecting their second son, a little brother for William August.

With our first son, we didn’t know his sex until he was born. The girl name (Alba Josephine) came easily, but we didn’t have our boy name until after he was born.

Most people, including us, call him Will, but he has a Grandpa that has never called him anything but Gus, which I love.

This time we know we are having a boy, but still we struggle. Obviously, I want a name that goes well with William, but William can go a few different ways. Royal, cowboy, American traditional …

Emily explains that she loves lots of qualities about her son’s name, and would like her next son’s name to share the same traits:

This one seems easy, right? But wait for the list of names that have already been eliminated, either because a family member has used it, or Emily or her husband have another reason for putting it on the “no” list:

Names that seem to fit their criteria, but don’t feel like The Name:

Emily adds that they’d like to avoid overly Biblical names, and concludes by saying:

Are there any names left? We are stuck!

I will end with saying that a lot of the names I have discarded in my mind I could see myself falling in love with. When I was pregnant with my first, I never thought I would grow to love the names William and August as much as I do now. So maybe there’s hope!

Read on for my answer, and please add your thoughtful comments, too!

It’s true that you’ve got one kiddo with a great name, and a list of very specific criteria that could make it tough to choose some equally appealing for his brother.

Here’s the beautiful thing about baby names: the well never runs dry. There is always another name to consider.

And yet, I’ll admit that most of the names that came to mind while I was reading the first part of your post – Henry called Hank, Jonathan called Jack – did appear on your “can’t use/already discarded” or “nope, not into them” list.

You’ve mentioned that you might be persuaded to reconsider some of those names, but for my purposes, I’m going (to try my very best) to rule them all out.

Some first names that you haven’t discarded: 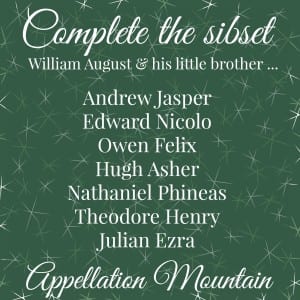 Now let’s take a look at some middle names that have the same feel as August – modern and slightly unexpected, but with more history than you might guess.

Let’s have a poll on the combinations:

Are there other combinations you can suggest for William August’s little brother?