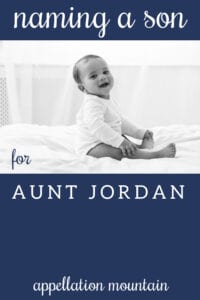 I lost my sister, Jordan Marie, to cancer when she was 17 and I was 13. I’ve missed her at lots of moments in my life, but especially now that I’m expecting our first baby in September.

I’d always thought I’d name my daughter Jordan or Jordyn, maybe. But it’s a boy, and I feel like Jordan is still the right name.

My mom was excited by the idea of a granddaughter named for Jordan, but can’t get on board with it for her grandson. She keeps saying “but it’s a girl’s name” and “I’m sorry, but he’ll be teased.” Things like that. When I ask around, people do seem to think of Jordan as a girl’s name.

My husband thinks it’s no big deal and just wants to go with Jordan. But I’m not sure he’s really giving this a lot of thought, either.

I’m hoping for an objective opinion: can I name my son Jordan? How should I explain it to my mom?

First things first: yes, I think you should absolutely name your son after your sister.

Jordan isn’t a new name by any means. It was first used in Europe during the Middle Ages, after Crusaders returned from the Holy Land. After all, Jordan is the name of the river the Israelites crossed into the Promised Land, and later, the river where Jesus was baptized. More broadly, it can symbolize transformation and freedom.

F Scott Fitzgerald used the name for a female character in his 1925 novel The Great Gatsby. At the time, Jordan was used in small numbers for boys and very rarely for girls.

Let’s look at the actual data.

So … while your mother obviously strongly associates Jordan with her beloved daughter, and thus finds it feminine, that’s not a completely unbiased perspective.

A Jordan born today – and over the last decade – is overwhelmingly likely to be male. Jordans in their teens, 20s and 30s? That’s more of a coin flip.

So naming your son Jordan after your sister seems perfectly reasonable – really quite thoughtful and lovely!

Is it really so awful if someone mistakes your newborn’s gender?

I suppose that within your family, Jordan is feminine. And so people who know you – friends and cousins – might certainly be surprised to learn that you’ve named your son after your sister.

My guess is that any surprise will quickly be replaced by tears of joy.

So maybe an uncle or long-time neighbor will blink and say, “Oh, but I thought you were having a boy?” There’s really no harm done in those few seconds of confusion. By the time your son enters the wider world of kindergarten, he’ll be surrounded by a broader group of people who will have a different image of the name.

And here’s the thing: with names, as with so many other things in life, we tend to get locked in to a particular opinion. If our oldest friend is a girl named Charlie, then we’ll think of Charlie as feminine … even though we can think of Charlie Brown and Charlie Chaplin and dozens more boys and men by the name. It’s not rational, but then … life would terribly dull if we were always rational, right?

Now about your mom …

I cannot imagine what your family must have went through, and how that pain and loss remains part of your family’s story. Welcoming a grandchild and handing down this precious heirloom name must be quite an emotional roller coaster. Could it be that your mom is just working through so many feelings that she’s not thinking about this quite straight? Or has more reservations about the name’s use than she’s expressing?

Or, to put it bluntly, Jordan isn’t a girls’ name. But it is her girl’s name.

How to proceed really depends on your relationship. If she admitted she was uneasy with using Jordan for your child, would you make a different choice?

Will numbers sway her? Looking up the data on the US Social Security Administration site might help demonstrate that your choice is perfectly in keeping with current name trends.

But only if that’s what’s really got her worried.

All of that said, I’d probably use the name.

It sounds like there really isn’t another name as meaningful to you as Jordan, and your husband is on board.

Maybe choose a classic masculine middle – Jordan Alexander, Jordan Michael, Jordan Henry … you get the idea – and it will emphasize that you’ve welcomed a son when you share his birth announcement.

And give your mom some time. Most grandparents, even when they really object to their grandchild’s name, soften a little when they meet their new family member.

If you do need a little breathing room between your sister’s memory and your son’s identity, I wonder if your mom might call him Danny as an affectionate nickname? Or something else that works for everyone?

I’m so sorry for everything you’ve gone through, and I think that remembering your sister with your son’s name is a lovely, fitting tribute that you’ll all feel good about – in time.

Readers, have you been through a similar situation? What would you say to Kelsey … or her mom?