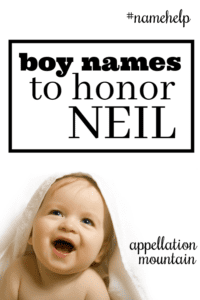 I’ve been a longtime lurker and now need name help from you and the community.

With Baby #1, we knew exactly which name to choose. Baby #2’s name, on the other hand, has been more difficult to agree on, and we’re considering the name Nile.

Most importantly, though, Nile could help us honor a family member named Neil. That said, are there any other boys names that could help us remember the legacy of the Neil in our lives?

First off: I straight up love Nile. It’s unexpected, but not in a wait-what-where-they-thinking kind of way. And you can always shrug off questions by saying, “Oh, it’s a family name.” Even if it’s a clever twist on a family name … which you can explain if you want to. Or not.

And it’s not just related to Neil because it shares the same four letters. Niles – the surname – comes from Neil. So you’re on comfortable ground.

Besides the athlete, there’s Rock and Roll Hall of Fame inductee Nile Rogers. You’ve heard his songs, either from disco-era legends Chic, or his later work as a Grammy-winning producer supporting artists from David Bowie to Lady Gaga.

Niles – Add the ‘s’ and it’s a surname name, closer in sound to Miles – perhaps confusingly so.

Niall – The Gaelic form of the name, often pronounced with two syllables in the US, closer to Kyle or Lyle. (Hear Ryan Seacrest say it here.)

Nigel – Through a series of whisper-down-the-alley, Neil became Nigel in medieval English. It’s a little bit out-there for an American boy in 2019, but there’s much to be said for considering such grandpa names.

Nelson – Yet another surname derived from Neil, made famous by world-changing activist Mandela. And The Simpsons.

As for choosing names that share Neil’s meaning: champion? There’s Victor, of course, and Nicholas.

And I’d be remiss if I didn’t suggest simply using Neil. I’ve met a toddler with the name, and I’m surprised by how fresh it feels on a child today.

Your other options, of course, involve brainstorming things about your loved one – favorite colors or songs, middle names and nicknames and such.

But overall, I find Nile pretty much unbeatable. 58 boys (and 14 girls) received the name in 2017. That makes it rare, but far from unknown.

Readers, what would you suggest to honor a loved one named Neil? Creativity encouraged!