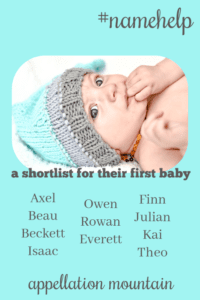 My boyfriend and I are expecting our first child in a few weeks. It is a complete surprise, and while we’re happy about it, I feel behind on EVERYTHING. That’s probably because I’m a planner, and this pregnancy has messed with all of my ideas about what it would be like … someday.

I have a list of names I like: Isaac, Owen, Rowan, Axel, Beckett, Beau, and a few others. He doesn’t seem to have much of an opinion about it, and no name stands out as better than the rest. In fact, this list is today’s list. It was different a month ago, and could change completely again.

His only request is that we use his grandfather’s name, Patrick, as our son’s middle name. We won’t get married until summer, but the baby will have his last name, which sounds almost like Lawrence, but is spelled differently.

A new baby, a new husband – it’s a lot! No wonder you’ve got decision fatigue when it comes to choosing a name.

It’s not unusual for one partner to be far more interested in names than the other. And while I don’t like to stereotype, very often it works like this: the mom-to-be suggests. The dad vetoes. Or maybe shrugs noncommittally.

Neither response is helpful.

And as a planner, I feel your pain. My husband sometimes shrugs off decisions that I’m mulling over because they’re too far in the future for him to feel any urgency. But it doesn’t change the fact that they’re occupying space in my brain now.

So instead of talking about names, could you talk about strategies?

I’m convinced that one of the reasons picking names is tough is that there’s no framework. When we rent an apartment or buy a house, there are things to consider: price, neighborhood, distance to work or school, and so on. But a name lacks those objective measures. Nancy’s Baby Names has some great tools that might help.

Or maybe a spreadsheet isn’t the answer. Would your boyfriend agree to something like this?

I’d rule out Isaac, because Isaac Patrick is I.P. I don’t believe in worrying overmuch about teasing potential, but that one strikes me as awkward.

Everett – Just like Beckett, but I think that extra syllable in Everett sounds better with Patrick Lawrence.

Finn – Is Finn Patrick too Irish? I don’t hear Finn as shamrock green these days – it strikes me as modern and nicely Americana.

Julian – Close to Owen and Rowan, but again, adding an extra syllable might increase the name’s overall appeal.

Kai – It reminds me of Beau, but while Beau leans slightly Southern, Kai feels more international. Nothing wrong with either style, just another option to consider.

Theo – You seem drawn to the long ‘o’ sound in Owen and Rowan and Beau. Would you consider an -o ending name? Leo, Milo, and Arlo all have a strong ‘l’ sound that might conflict with Lawrence, but Theo could be perfect.

I could go on … and on! But I’m curious to hear what others have to say, both about names and about how to encourage reluctant partners to engage in the naming process!

Readers, what would you suggest to Jess? And how did you handle a partner who wasn’t into naming the baby?